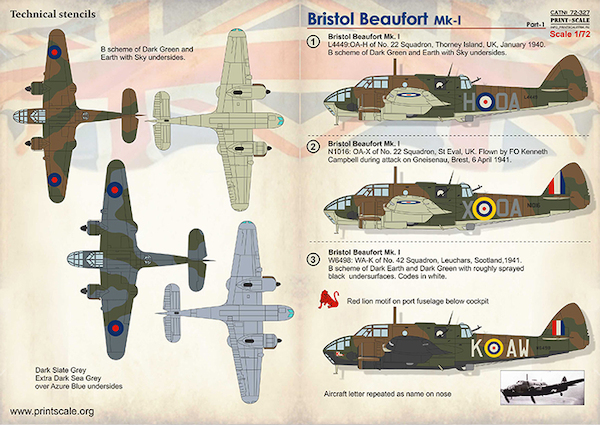 Bristol Beaufort Part1 MK1 (Print Scale PRS72-327)
€ 9.88
EU: incl. tax € 11.95
Reduced shipping charge may be applicable depending on country of destination and contents of shopping cart. Will be shown before checkout.Add to cart

4. Bristol Beaufort Mk. l. AW243:AW-O of No. 42 Squadron, Leuchars, Scotland, December 1941. Piloted by PO Philpot, one of the 'Wooden Horse' escapers. B scheme of dark Slate Grey and Extra Dark Sea Grey with Sky undersurfaces. Note the cut back faring around the rear turret to improve the arc of fire.

5. Bristol Beaufort Mk. l. L9802:GX-S of No. 415 Squadron, Thorney Island, November 1941. B scheme of Dark Slate Grey and
Extra Dark Sea Grey with black undersurfaces. Codes in black with aircraft letter in white and also on nose in yellow.

7. Bristol Beaufort Mk. lA. Ek997 of the A&AEE used for tests of an airborne flame thrower for fighter defence, Boscombe Down, England, Spring 1943. Type B scheme of Extra Dark Sea Grey and Dark Slate Grey over Sky lower surfaces. Note the pipe and nozzle extending from the open bomb bay.