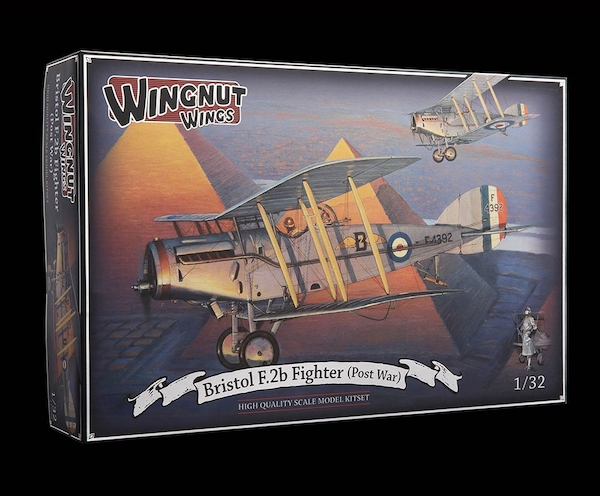 Deliveries of this new aircraft to 48 Squadron RFC started in December 1916 and continued through to March 1917 at which time they flew their 18 new Bristol F.2a Fighters to France. Their operational debut on 5 April 1917 was somewhat less than successful. Despite having the Bristol Fighter on strength for 3 months 48 Sqn thought it to be structurally unsound and, despite its name, flew them in a rather sedately manner similar to two seat reconnaissance aircraft, slow and steady as a platform for the rear gunner. Not surprisingly they were shot down just like slow and steady reconnaissance aircraft. It was soon realized that Bristol's fighter was actually a very sturdy aircraft that could, and should, be maneuvered as if it were a single seat fighter with rear protection. And a fighter it was, with over 240 pilots and gunners achieving ace status in the type before the end of the Great War. Further refinements to the design, of which the most obvious was angling the front longerons downwards to improve pilot visibility, resulted in the F.2b appearing in April 1917.

Several different engine types, including 150-200hp Hispano Suiza and Sunbeam's 200hp Arab, were fitted to the "Biff" (as it became affectionately known during the First World War ) or "Brisfit" (in the post war years) but by far the most common and successful were the 190-275hp V12 Rolls Royce 'Falcon' 1, II & III. A misguided attempt to build a version in the USA powered by the overly heavy 400hp Liberty engine came to naught. The Bristol Fighter continued to serve long after the First World War with numerous countries including the UK, Belgium, Ireland, the Netherlands, Peru, Mexico, Canada, Greece, New Zealand and even China. Post war modifications, as featured in this model, were numerous and included modified engine cowlings and radiator slats for improved cooling, longer exhaust manifolds, an auxiliary "tropical" radiator, modified instrument board and a larger balanced rudder. Some very late serving aircraft could also be found with variable pitch propellers, a larger horizontal tailplane and leading edge slats on the top wings. The Bristol Fighter was not withdrawn from RAF service until April 1932 and wasn"t finally withdrawn from Commonwealth service until it was retired by the NZPAF in 1936.

Early aircraft colours are contentious at the best of times and we have done our best to provide what we consider to be accurate painting information. War time Bristol Fighters were generally finished in PC10 (Protective Covering number 10) on the upper surfaces, CDL (Clear Doped Linen) on the undersides and BSG (Battleship Grey) on metal cowlings etc. Very late war aircraft upper surfaces were often finished in AMAPD (AMA Protective Dope) which contained pigments giving a "dark chocolate brown appearance". Surviving RAF aircraft could still be found wearing these colours post war but newly built aircraft or those having undergone conversion to Mk.II status could be finished in AMAPDT (AMA Protective Dope Tropical) dark reddish brown on the upper surfaces for service in the tropics or silver doped overall. Engine cowlings were painted BSG or unpainted and highly polished. Steel components, fittings and brackets were usually painted black. All fabric surfaces exhibited a gloss appearance when new which would lose its shine relatively quickly in service