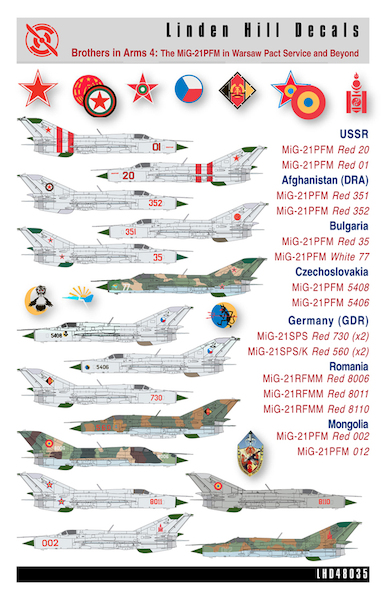 Brothers in Arms 4: MiG-21PFM (Linden Hill Decals LHD72033)
€ 17.31
EU: incl. tax € 20.95
Reduced shipping charge may be applicable depending on country of destination and contents of shopping cart. Will be shown before checkout.

This product was added to our database on Wednesday 19 August 2015.

'Brothers in Arms 4' brings together an interesting collection of Type 94 MiG-21s from 1966 through 1992. It features some notable MiG-21PFMs from the Cold War era and its aftermath. The Afghan subjects on the sheet saw service at the very beginning of the conflict (1978), which arguably continues to the present day. The Czechoslovak and Soviet PFMs depicted represented both sides of the 'Prague Spring' protagonists in 1968. In East German service we present the MiG-21SPS in both its most notable public incarnation (730 opened the 1968 World Aerobatics Championships in Magdeburg with a spectacular rocket-assisted take-off) and its most decorated example (560 was the first East German fighter to achieve a 'kill' on a La-17 target drone in 1986 and repeated the feat in 1989, shortly before the Berlin Wall fell. Further afield, we present two PFMs flown by the Mongolian Air Force. The People's Republic of Mongolia was an associate member of the Warsaw Pact. After the local communists were driven from office, the Mongolians continued to fly a few MiGs well into the 1990s.

Finally, we continue our historical coverage of the often overlooked southern Warsaw Pact Air Forces of Romania and Bulgaria. We include Romania's famous 'Papagulul' (parrot) MiG-21. This unique bird flew as a test 'canvas' for the later MiG-21 Lancer A and B camouflage schemes.