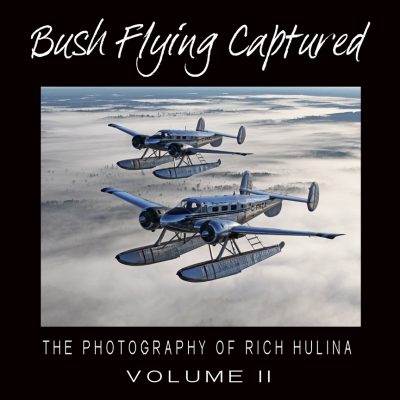 This product was added to our database on Friday 2 March 2018.

In this second volume of Bush Flying Captured, aviation photographer, Rich Hulina takes you along on some very epic photo shoots. Rich is known for his passion for classic bushplanes and everything associated with them. His love for remote, back-country flying and the interesting people who keep these timeless machines going is evident in his stunning photos. A great deal of history is connected to these iconic aircraft, as most of them were built belween 1940 and 1970. Bushplanes have been providing air transport for almost a century now, and, due to their durability and versa- tility, still fill an important niche in the North today. For over 30 years, Rich has been chasing bushplanes, trying to capture their beauty in their natural environment. He has spent his entire working life around bushplanes, storting off as a dockhand, then a line pilot, and eventually owning hisown bushplane charter company until returning back to the role as a pilot in 2014. His pictures have appeared in numerous publications and recently won lst place in both the Civil and General cat- egories of the Skies Magazine's annual photo contest in 2016. Since publishing the first volume of Bush Flying Captured in 2011, Rich has travelled more than 50,000 nm, from Greenville, Maine to as far west as Dillingham, Alaska. He has shot over 42,000 images during the past 6 years, and has chosen 250 of them to appear in this impressive collection. Bush Flying Captured Volume 2 is a must-have for any aviation fan and for those who are lucky enough to have volume one, it is a worthy addition to the collection.