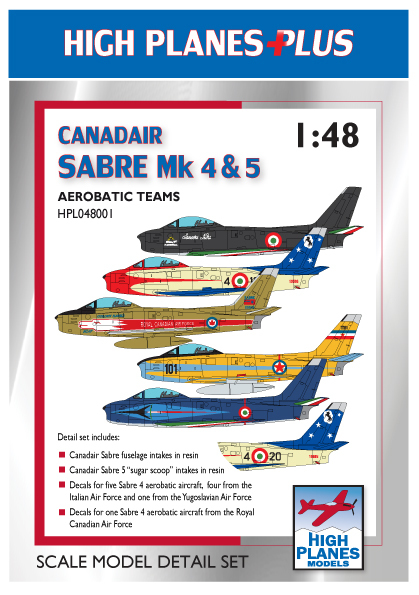 This product was added to our database on Monday 24 October 2016.

The Canadair CL-13 Sabre was built under license from North American Aviation. Early models were similar to standard NAA production but with the Mark 3 Canadair began to modify the aircraft to improve performance. Canadair Sabres of various marks were supplied to European air forces under the NATO Military Assistance Program.

The Canadair Mk 4 was very similar to the North American F-86F-30. The lessons from the Korean War were incorporated in the airframe, including the 'all flying" tail plane. Unlike the F-86F, the Mk 4 retained the earlier GE J-47-GE-13 and the most distinctive external difference was the additional fuselage side vents.

The Canadair Mk 5 was substantially re-engineered. The Orenda 10 engine increased the thrust by 25% to 6,500 lbf (29 kN) and the fuselage access panels were modified for the new engine. To increase cooling, 'sugar scoop' vents were later added as a field modification to the Mk 5 and its successor the Mk 6.
This kit includes five schemes from aerobatic display teams from the 1950s and 1960s.

The RCAF Golden Hawks were formed in 1959 to celebrate the 50th anniversary of powered flight in Canada, coinciding with the 35th anniversary of the Canadian air force. The team initially flew Sabre Mk 5, later changing over to the higher powered Mk 6. It disbanded in 1964.

The Yugoslavian Air Force 204 Fighter Aviation Regiment formed the display team Akro Grupa 204 in 1959 flying the Sabre Mk 4s and it performed until 1964.


The High Planes Models Plus details set includes the resin parts and instructions for building an accurate Canadair Sabre Mk 4 or Mk 5 and a colourful decal sheet.