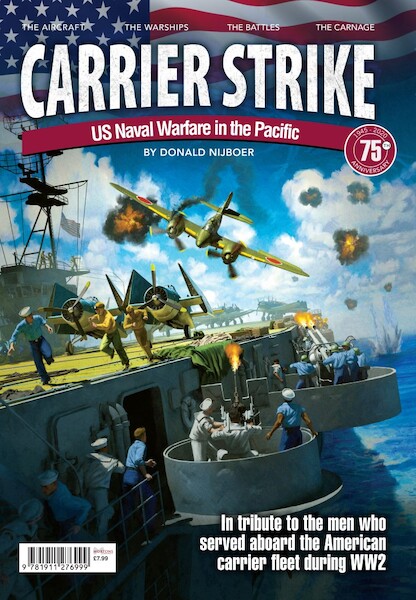 By the end of the day on December 6, 1941, the American Pacific fleet at Pearl Harbor lay shattered. In a single devastating surprise attack the Imperial Japanese Navy had demonstrated the awesome striking power of a combined carrier fleet - before proceeding to rampage across the Pacific, seizing territory from the Aleutians to Singapore. With the highly manoeuvrable Zero fighter and 'Val' dive-bomber, flown by experienced crews, the Japanese were able to overwhelm even the best Allied resistance.

But within a year of Pearl Harbor, the tide had turned. The US Navy's successful Guadalcanal campaign marked the beginning of a remarkable fight-back. Fast new fleet carriers such as the Essex and Independence class warships were introduced and the ruggedly powerful Grumman F6F Hellcat fighter gave the US a clear advantage in the air.

In a series of epic naval battles and running skirmishes, the US Navy's Fast Carrier Task Force inflicted massive damage on the Japanese fleet before a new threat began to appear - the kamikaze.

Unable to score hits by conventional means, the Japanese took to crashing bomb-laden aircraft directly into American vessels. Yet despite such fanatical tactics, the US Navy's carrier fleet fought its way across the Pacific to launch attacks on the Japanese homeland in 1945.

In Carrier Strike: US Naval Air Warfare in the Pacific, historian Donald Nijboer tells the full story of the American carrier fleet during the Second World War - the vessels, the crew, the aircraft and the pilots as well as their British Royal Navy allies and the deadly Imperial Japanese Navy forces they faced in combat.