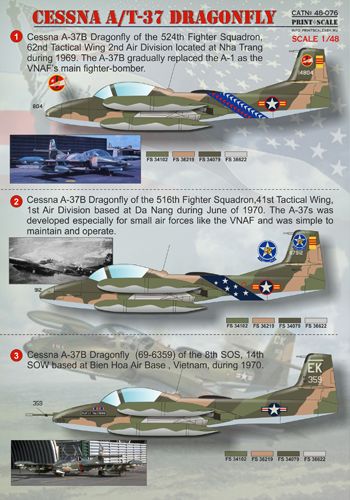 Cessna A-37/T-37 Dragonfly (USAF, NVAF, Peruvian AF) (Print Scale PRS48-076)
€ 8.22
EU: incl. tax € 9.95
Reduced shipping charge may be applicable depending on country of destination and contents of shopping cart. Will be shown before checkout.Add to cart

This product was added to our database on Friday 20 february 2015.

1.СCessna A-37B Dragonfly of the 524th Fighter Squadron, 62nd Tactical Wing 2nd Air Division located at Nha Trang during 1969. The A-37B gradually replaced the A-1 as the VNAF's main fighter-bomber.

2. СCessna A-37B Dragonfly of the 516th Fighter Squadron,41st Tactical Wing, 1st Air Division based at Da Nang during June of 1970. The A-37s was developed especially for small air forces like the VNAF and was simple to maintain and operate.

4. The Vietnamese Air Force (VNAF) flew large numbers of A-37Bs, including this Dragonfly of the 520th Fighter Squadron based
at Binh Thuy Air Base.

5. A-37B of 520th Fighter Squadron, 74th Tactical Wing, 4th Air Division at Binh Thuy during 1970. A-37 were well liked by VNAF aircrews for their agility and load carrying capability.