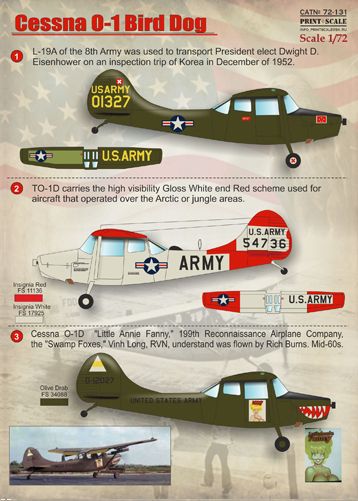 Cessna O-1 Bird Dog (Print Scale PRS72-131)
€ 9.05
EU: incl. tax € 10.95
Reduced shipping charge may be applicable depending on country of destination and contents of shopping cart. Will be shown before checkout.Add to cart

1. L-19A of the 8th Army was used to transport President elect Dwight D. Eisenhower on an inspection trip of Korea in December of 1952.

4. This shark mouthed O-1D of the 19th TASS was one of the first Air Force Bird Dogs to deploy to Vietnam during July of 1963.

10. MAJ Boung used this VNAF O-1A to South Vietnam with his wife and five children. MAJ Boung made the first landing bu an O-1 on an aircraft carrier, landing on USS MIDWAY on 30 April 1975