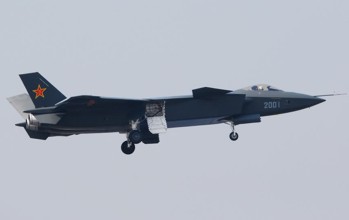 This product was added to our database on Wednesday 25 february 2015.

In late 1990s, the Chinese People's Liberation Army Air Force launched the stealth fighter program, Western intelligence applied the codename J-XX. The Chengdu Aircraft Industry Group was selected to be the main contractor for the development. In 2009, the China Air Force commander confirmed that the development of the stealth fighter prototype that designated J-20 was ongoing. No any imagery's of the J-20 prototype came out until it underwent high speed taxing tests in late 2010, considering that the program was kept in high secrecy. The J-20 made its first flight on 11 January 2011. The PLA have not disclosed the engine type. There are claims that the Russians supplied super-cruise capable 117S series engines. As the engine nozzles were clearly non-stealthy, this may be due to the fact that the final "fifth generation" engines had not been completed. The J-20 is expected to use a AESA radar, which should have Low Probability of Intercept modes. The U.S. Department of Defense expects China to have the production fighters in service between 2020 and 2025.