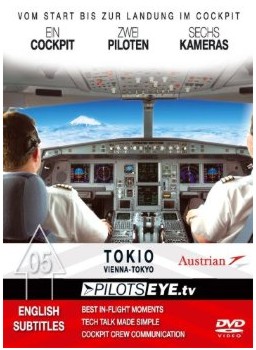 Cockpitflight Boeing 777-2Z9ER Austrian : Vienna-Tokyo (PilotsEye 9783940358059)
€ 24.75
EU: incl. tax € 29.95
Reduced shipping charge may be applicable depending on country of destination and contents of shopping cart. Will be shown before checkout.

This product was added to our database on Sunday 12 july 2009.

Fly with Austrian Airlines to the land of the rising sun Perfect weather, average temperatures and a cheerful crew – that's how PilotsEYE.tv takes off this time from runway 34 of the Vienna airport VIE. For the first time, a takeoff of a PilotsEYE.tv flight is shown from three perspectives – from the cockpit, from a witness' point of view next to the airstrip, and from the tower. A couple of minutes after takeoff Captain Fritz Strahammer, AUA chief pilot and his co-pilots Tarek Siddiqui and Josef Trattner will change from the Vienna air space to Bratislava Control. The manoeuvre to another air space will be repeated a couple of times until the Boeing lands in Tokyo – however always with different dialects. It's a dream flight: calm weather and an amazing sun rise as it can only be seen over the clouds. A highlight that makes astonishing impressions possible, is a coincidental rendezvous over the Russian Taiga with a Lufthansa 747-400, which flies very close underneath the 777. This is one of the spectacular PilotsEYE.tv moments which contributes to the success of the series. A sight into the captain's office During the flight, Captain Strahammer lets the viewer in on the basics of the Boeing 777 cockpit. What is the function of the left and right display, which buttons does a pilot need most? Why does the altimeter automatically show the height of the plane also in "meters" rather than "feet", which is the more customary aviation measurement? Exact visualisation with 'Moving GPS-Tracks' For the first time "Moving GPS-Tracks" are used in a PilotsEYE.tv-episode: To visualise the position and the covered distance even better and to make it more comprehensible, this technique which uses Google Earth to follow the flight route, will be used regularly from now on. Impressions from Tokyo's neon and glittering world The land excursion on the day of rest before flying back is practically a PilotsEYE.tv classic. Captain Strahammer does not hide his passion for Asia and declares himself a tour guide. He shows how close tradition and modernity are side by side in Japan and takes the viewer to one of the most famous landmarks, the Tokyo Tower. From the highest platform one gets a 360 degree view of the skyline to the Zojoji temple next of the Japanese Eiffel tower. With a stroll through the blazing neon streets of Tokyo, this Far Eastern trip comes to an impressive conclusion. Preview to the next PilotsEYE.tv episodes: Even in a serious business as aviation, there is plenty to laugh at: the best outtakes, the funniest slips of the tongue, are shown at the end of the Tokyo flight. To whet the viewer's appetite, the trailer for the next PilotsEYE.tv flight to Seattle (A330) can be seen. A glimpse offstage at the Boeing and the features of the new 747-800 together with the second in command Lufthansa Captain Frank Lunemann are tantalizing previews to PilotsEYE.tv next episode.