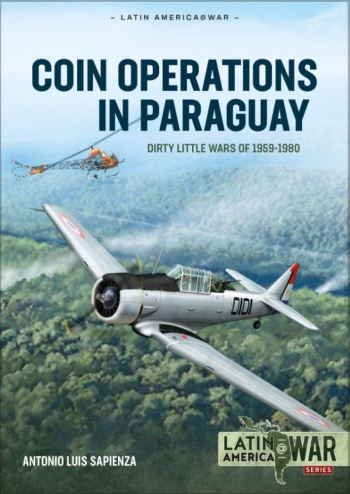 In 1959, some members of the Liberal Party and the "Febreristas" in exile in Argentina formed a guerrilla group called "14 de Mayo" (M-14) and planned a series of attacks to the government installations. Some of them were veterans of the Chaco War with military training but the rest was not trained at all. They got some weapons through donations of exiled supporters and ammunition, explosives and radio equipment from the Argentinean Army. On 12th December of that year, five rebel columns totaling 250 effectives crossed the Paraná River to different cities. The first column, called "Libertad", with 18 members in three boats, was supposed to seize the city of Encarnación. Two of the boats were captured by a Paraguayan Navy motorboat and all the M-14 members were detained. The remaining boat had to return to Posadas, Argentina. The second column, called "Mainumby", with 40 members, could land near the city of Capitán Meza, Paraguay, but most of them were killed by the Paraguayan Army. Stroessner had immediately mobilized the Cavalry and Infantry troops, which under the command of Generals Hipólito Viveros and Patricio Colmán had been taken to the Itapúa and Caazapá area by several TAM Douglas C-47s. American COIN experts helped the military forces in the battlefield.  The Cavalry Regiment Nr. 3 troops were under the command of Lt. Col. Andrés Rodriguez and were sent to the Caaguazú and Alto Paraná area; The Navy gunboats patrolled the Paraguay and Paraná Rivers and also contributed in logistics. The "guerrilleros" were poorly organized and under armed, with no chances of confronting the then powerful military forces of the Stroessner's regime successfully. The third column, called "Patria y Libertad", with 40 members, crossed the Paraná River from Puerto Iguazú, Argentina, with the intention to seize the city of Puerto Presidente Franco, but one of their boats sank. The other boat reached the Paraguayan coast but after a few days in the forests, they were captured by the Army. The fourth column, "Pilar", was supposed to seize the city of Pilar but their only boat was inoperative. Instead they decided to capture the Paraguayan Navy boat "Bahia Negra" which was docked at the port of Corrientes, Argentina. The crew repelled the attack, and the attackers had to retreat with several casualties. The fifth and last column, "Amambay", wanted to seize the city of Pedro Juan Caballero, but all its members were captured by the Brazilian authorities in Ponta Porá. A second wave with two columns, "Resistencia" and "Libertad", with 150 effectives crossed the Paraná River into Paraguayan territory on 28th April 1960 with the intention of establishing their base in the Yvyturusú mountain range and start a Sierra Maestra like guerrilla war. The "Resistencia" members were soon ambushed by the Paraguayan Army effectives, some of them killed and others immediately abandoned the area towards Argentina. The other column was strafed by some Paraguayan Air Arm aircraft and pursued by regular Army troops led by General Colmán. The guerrilleros had many casualties and few of them were captured.

The M-14 did not have the support of the authorities of those political parties mentioned before and many of them were exterminated. 120 were captured and sent to prison and 42 of them could escape to Brazil in 1961.