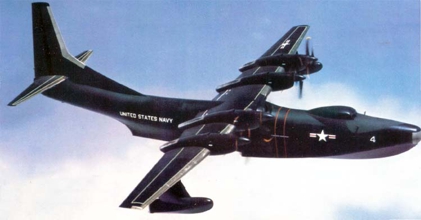 In 1944, the US Navy asked the industries to enter a design competition for a 105,000 pound patrol boat powered by four radials. At the end of the war, two German Bv.222 flying boats were captured by US forces. Convair acquired one for evaluation at Naval Air Station, the intensive studies leading to the hull design of their Model 117. In early 1946, Convair received a requirement from the US Navy for a large flying-boat using the new laminar flow wing and the developing turboprop technology. It was awarded a contract for two prototypes, designated XP5Y-1 Tradewind. After the first aircraft crash in 1953, the Navy decided not to proceed with the patrol boat version but changed into a passenger and cargo aircraft. The Tradewind program was redesignated R3Y. A total of eleven aircraft were built. Five were built as R3Y-1 aircraft, intended for troop transport service. The R3Y set a transcontinental seaplane record of 403 mph in 1954 by utilising the speed of high-altitude jetstream winds. This record still stands. The program was halted after thirteen aircraft were built, the reason being the unreliability of the Allison T-40 turboprops.