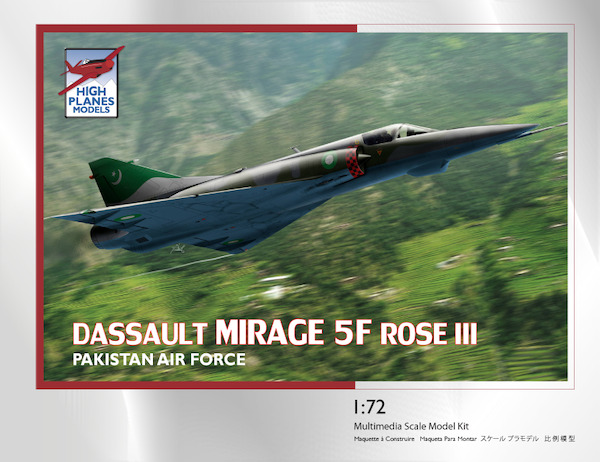 This product was added to our database on Tuesday 17 December 2019.

The Dassault Mirage is one of the most successful French aircraft designs of the post-war era, and an outstanding third generation jet fighter. The Mirage III prototype first flew in 1956 benefiting greatly from the work done on the experimental Fairey FD-2 Delta. It entered service with the French Air Force in 1961.

The Pakistani Air Force (PAF) was an early export customer for the Mirage, purchasing the IIIE variant in 1969. These remained in long service, and the Pakistanis acquired surplus airframes from a number of operators for their own use or as spares.

In 1996, the PAF acquired 40 retired Mirage 5F and 5DF aircraft from the France, and upgraded these for advanced night strike. This program was known as Retrofit of Strike Element (ROSE). The first series (ROSE II) had improved avionics, sensors and a Forward Looking Infra-Red sensor (FLIR) to allow low level and low visibility precision strikes. The second series (ROSE III) added a SAGEM navigation / attack avionics suite. Externally they look the same.

These upgrades allow the aircraft to use precision strike and stand off weapons. Pakistan began developing these with South African assistance.

The ROSE II aircraft are reported to be assigned to 25 SQN "Night Strike Eagles", and the ROSE III aircraft to 27 SQN "Zarrars", with some airframes in a central reserve. and Combat Commanders Schools.