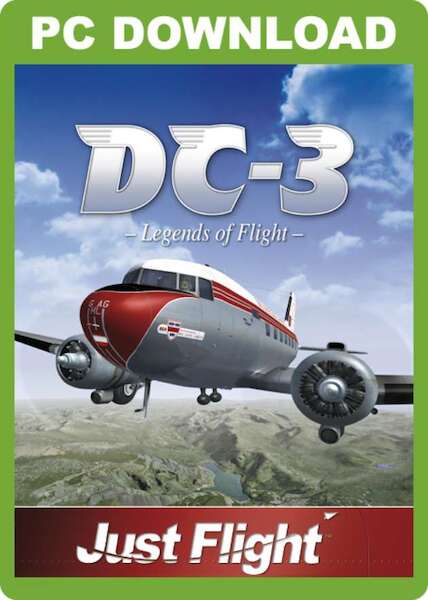 This product is available for download immediately after confirmation of receipt of payment. By accepting our terms and conditions confirms that the statutory 14 days right of withdrawal for internet purchasesábyáEU residents will not be applicable to this product and the buyer waives his right of recall.

The DC-3 was always the aircraft that manufacturers wanted to replace with something better and more modern but the DC-3 performed so well that a viable replacement wasn't easy to produce - hence the saying, "The only aircraft to replace a DC-3 is another DC-3."

This fantastic package features the Douglas DC-3 in seven classic airline liveries, as well as two USAAF C-47 transports and an RAF Dakota. Also included are the AC-47 gunship, which saw service in the Vietnam war, and a fully flyable Waco CG-4A glider!

The aircraft exteriors and virtual cockpits are all modelled to the highest level of detail, and civilian passenger cabins and military cargo holds are modelled with appropriate animations - suitably dressed stewardesses and crew vehicles for the airliners, and cargo and troops in the military transports.

Fly the many variants of a true Legend of Flight!

The DC-3 Virtual Cockpits come with fully detailed interior cabins, featuring a hostess figure is in the doorway of the exterior model and a passenger in the interior. A boarding ladder is provided for the converted C-47 versions with the military-type doors, and the other DC-3s have drop-down doors with integral steps and animated hand-holds.

Models feature the correct passenger/cargo door variations that featured on the aircraft in different airlines.

The AC47 Gunship has accurately modelled mini-guns fitted to the fuselage and doorways and the VC has the correct gun-sight adaption in the pilot's side window and a gun operation panel. The VC view includes a detailed interior including a gunner.

The Waco glider comes with two military pilots and a fully functional VC for flying independently in tow mode with the correct release mechanism and handles for the tow rope. The nose of the glider swings open for cargo loading.