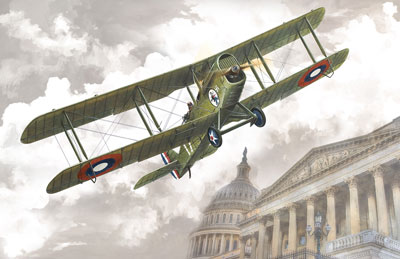 This product was added to our database on Saturday 18 December 2010.

IOn April 6th 1917 the United States of America declared war on Germany and soon the American Expeditionary Forces were organized for combat in Europe. The U.S. government's propaganda urged people to join the army and this appeal found a ready answer across the breadth of American society. But in fact the U.S. could then only support the armies of the Entente with infantry or cavalry formations this huge manufacturing powerhouse with such considerable industrial potential still did not have neither its own armored forces nor regular air units. The purchase of British and French vehicles to resolve this problem was immediately set in motion, and military authorities were instructed to consider the purchase of licenses to build various types of armament, including planes, in the U.S.A. itself.
The two-seat general purpose de Havilland DH.4 aircraft, designed by Geoffrey de Havilland in the middle of 1916, was ahead of its time in many respects, and it had an advanced construction with much potential for upgrading in the future. One major drawback was its engine installation different British firms installed a variety of engines in the airframe, each time leading to the appearance of numerous modifications; additionally, most of the British engines were beset with technical flaws. Together with various other British types, the de Havilland DH.4 was purchased by a special military commission which arrived in Europe from the United States in the summer of 1917.
After their arrival in the U.S. and study of their technical documentation, it was the de Havilland which was selected as optimal for the initiation of its mass production in U.S. factories; but the Americans straightaway rejected the Rolls Royce Eagle engine, preferring their own Liberty engine, similar in size and performance but much more reliable in use. Visually the plane was little changed except for the redesigned nose section around the engine installation. The nose featured a typical radiator shape, shutters for better ventilation of the engine, and a new upper fuselage panel. Otherwise, the British Vickers machine guns were exchanged for American Marlins. The Dayton-Wright, Standard Aircraft, and Fisher Body factories were all involved in production of the DH-4. These three companies managed to produce more than five thousand Liberty DH-4's in a short period of time.
While the Liberty DH-4 was being mass produced by the Americans, and being sent to the war in Europe, the British had improved on the design of the DH.4 and were soon delivering its successor the DH.9 to the front-line military. Geoffrey de Havilland had eliminated the major drawbacks of the "Four" the distance between the crew was reduced, by relocating the vulnerable fuel tank, which was between the pilot and gunner; and he had also improved the system of fuel delivery to the engine. At that time the U.S. machines, which had already entered the war and unlike the British DH.4 did not have substantial problems with the engine, incurred horrific losses due to burning fuel tanks, damaged during air combat and also due to persistent problems with the engine's fuel system. The plane quickly acquired the nickname of "Flaming Coffin" and the pilots of the Liberty DH-4 greatly envied their countrymen flying the Breguet 14 or the Salmson 2A2. The spirits of the American pilots were demoralized; they simply began to fear a dangerous aircraft.
After extensive use of the Liberty DH-4 in the main air battles of the second half of 1917 the U.S. armed forces began a gradual upgrading in favor of French two-seaters. In the middle of 1918 the Liberty DH-4 was used less and less and machines were transferred to reconnaissance units as well as to newly formed aviation units of the U.S. Navy. While there was growing aversion among the American pilots in Europe towards the "Flaming Coffins", designers in the U.S. tried to solve the problems with the fuel system. Out of this came the DH-4B this version having a changed fuel tank location and an improved engine fuel system. However, it was not sent to the war in Europe. With the end of WWI, in America as well as in Europe, a spirit of pacifism began to prevail, and Congress did not allocate any funds for new developments. A large number of Liberty DH-4's which were returned from Europe to the U.S. were rebuilt as DH-4B's, and the aircraft continued to be used by the U.S. Army into the 1920's. Many DH-4's fell into private ownership. Apart from barnstorming in the "air circuses", they were destined to play one more very important role: the DH-4 began to be used as a mailplane and a light transport. In the vast geographical area of the country it was a highly important innovation, instrumental in the development of commercial aviation in the future.
Markings for:
D.H.4 (Dayton-Wright-built) N32457, 19, of 20th Aero Squadron (Bombing), USAS, France, 1918.
D.H.4 (Dayton-Wright-built) N32274 (A-3261), D-11, Of the US Marines'C Squadron of the US Marine Corps Northern Bombing Group, flow by 2/Lt. J.F.Gibbs with 2/Lt. F.Nelms as his observer. Fresne air field, Netherlands after a raid on Lokeren in Belgium, on 28 October 1918.
D.H.4 (Dayton-Wright-built) N32808, 17, of 11th Aero Squadron (Bombing), USAS, Flown by Lt.John L.Garlough with Lt. Robert C.Payton as his observer Maulan, France, 1918.