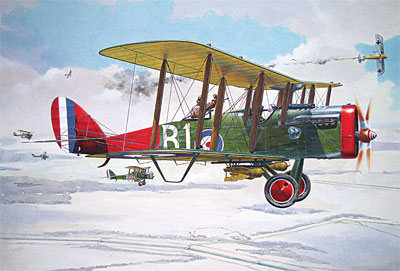 In 1916 Geoffrey de Havilland, English pilot, and chief designer of the Aircraft Manufacturing Company Ltd (Airco), proposed to the military authorities a project for a multipurpose two-seat airplane with a 160 hp Beardmore water cooled engine and the classic crew arrangement of pilot in front and gunner-observer behind.
Already by August of that year the new type, the DH4, made its first flight under the control of its designer. Its performance was more than satisfactory and De Havilland's firm received a preliminary order as soon as autumn 1916 for 740 machines. However, the Beardmore engine appeared to be unimpressive to say the least, and consequently the airframe was quickly adapted to take the Rolls Royce Eagle engine. Production machines differed from the prototype in the fuselage nose, but the rest of the construction appeared to be very successful and no substantial changes were required elsewhere.
The first production aircraft were delivered to 55 Squadron of the Royal Flying Corps in January 1917, and during the next few months six other units received the DH4. Soon it gained wide popularity among air crews and was considered to be the very best single-engine bomber. Even with a full bomb load it retained good basic flying qualities, and after releasing its bombs it could fight on equal terms with enemy fighters.
DH4 bombers mostly flew on combat missions without an escort of fighters. The only shortcoming of the design was a significant distance between the crewmen, due to the location of the fuel tank between the pilot and gunner-observer. Its impressive speed and rate of climb allowed the type to be used not only as a bomber, but also as an interceptor and high altitude photoreconnaissance plane.
Several other aircraft manufacturers were soon drawn in; FW Berwick & Co, Glendower Aircraft Company, Palladium Autocars, Vulcan Motor and Engineering, and Westland Aircraft Works all built the DH4, apart from Airco itself. Overall, during 1917-1918 British firms produced almost
1,500 DH4 aircraft, in all its different versions. Additionally, the type was ordered into production in the United States in vast numbers.
With the increasing volume of series production, other engines were installed in the DH4; the RAF3a, the Siddeley Puma, and the Fiat A12. Machines built in USA from the very beginning had only the American designed Liberty engines. However, the majority of aircraft built in its native Britain were fitted with one or other of the various versions of the Rolls Royce Eagle.
At the beginning of 1918 the Royal Flying Corps gained a successor to the DH4, the multipurpose two seat DH9. It was planned as an improved development of the DH4 and was intended to replace it, however already by the summer of that year, due to a poorly performing engine and serious combat losses, it was withdrawn from the front line, and the DH4 continued its active service until the last months of the War, when it was replaced with the up-to-date DH9A.
The DH4 was widely used on the Western Front, and many machines were employed on other fronts. Apart from Great Britain, Canada, South Africa, New Zealand, Spain, Greece, Cuba, and Chile were all equipped with the DH4. During the Russian Civil War Wrangel's White Army received approximately 20 airplanes of the type from Great Britain, and at least two of them were fitted with Rolls Royce Eagle engines and were captured by the Red Army, and used by the Workers' and Peasants' Air Fleet. After the end of WWI many DH4s were rebuilt as passenger, transport and mail planes and were used in these roles until the late 1920s