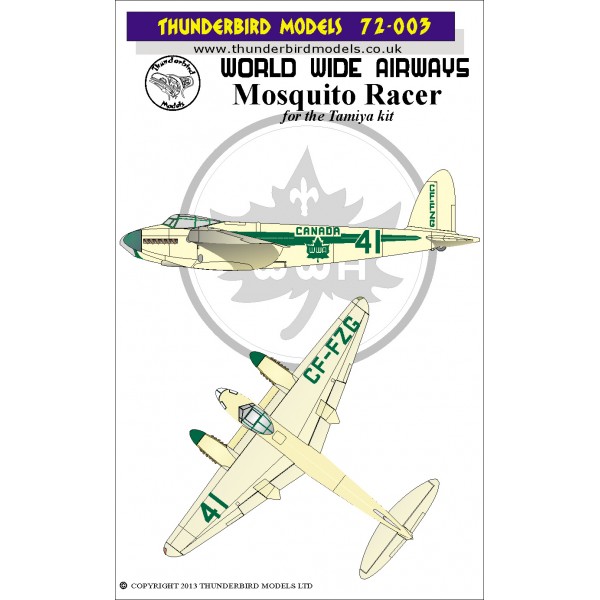 De Havilland Mosquito Racer (World Wide Airways) (Thunderbird Models TM72-003)
€ 6.57
EU: incl. tax € 7.95
Reduced shipping charge may be applicable depending on country of destination and contents of shopping cart. Will be shown before checkout.Add to cart

This product was added to our database on Thursday 30 January 2014.

Don McVicar, the founder of World Wide Airways, was one of the true originals of Canadian aviation. Born in 1915, he learned to fly in 1936 from the well known Maurice Burbidge (a former McKee Trophy winner- Canada's highest award for civilian aviation) and was one of the early group of Ferry Command pilots making his first flight with them in 1941. Later he helped prove several of the staging routes to England and flew the first ski-equipped Norseman into Baffinland.

In 1948, McVicar bought the first two Mosquitoes released to a civilian in Canada, B Mk. 25s KB377 and KB984. Both aircraft were low time (377 had only 45 hours) and the purchase price was a mere $1,500 each! McVicar had become enamoured with the Bendix Air Races and was determined to enter a Mossie and represent Canada. KB984 was sold to American racer Jesse Stallings (also for the Bendix) for $5,000 and McVicar put all his efforts into prepping 377. Then the trouble began. First of all no major sponsorship could be acquired, although Kendall Oil agreed to provide all the necessary oil. There were major difficulties in certifying the a/c, McVicar eventually getting an endorsement in his transport Pilot's License to fly a D.H. Mosquito for ferry and racing purposes only. Then a flat tire (replaced by the RCAF). On the way to the race the aneroid in the port carb gave some trouble causing a delay in Buffalo, then an exhaust stack almost burned away causing a delay in Wichita. The final disaster was the failure of a connecting rod on the starboard engine. Packard didn't think it was necessary to beef up the connecting rod joint where it met the bearing, contrary to Rolls Royce's practice. Thus ended the career of KB377 as a Canadian aircraft. She was sold to Don Bussart and re-registered as N37878 and raced in the Bendix (and elsewhere) until written off when the air bottle for the pneumatic brakes exploded in 1951. For the full story read 'Mosquito Racer' by Don McVicar, published by Airlife.