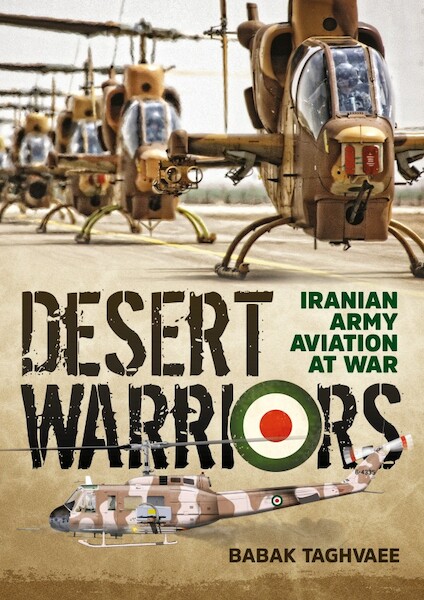 This product was added to our database on Tuesday 30 August 2016.

Under the leadership of a sagacious and patriotic ruler, who wasn't only cautious about the security of his state but was acting to stabilize worldwide peace by means of keeping the Middle East secure from the danger of Communism, the third most powerful Army Aviation in the world was born and flourished, its efficiency proven during its role defending Iran during the war with Iraq, 1980-88. One of the weaknesses of NATO's combat strength set against the Warsaw Pact was its armoured force. Following 1945 the armoured forces of the Soviet Union had quickly surpassed the West. Before the development of powerful new tanks such as the Shir 2 (Lion 2), Challenger 1, M1 Abrams in services with the Iranian, British and US armies, the only solution for confrontation with Soviet armour was the establishment of powerful Army Aviation forces. From the late 1960s His Imperial Majesty Mohammad Reza Pahlavi and many other commanders had realized the weakness of the Iranian Army compared to the powerful armoured forces of the Soviet Union and Iraq, two historical enemies of Iran, states who dreamed of reaching the waters of the Persian Gulf and the oil fields of Khuzestan province respectively. By following such a strategy, Iran possessed the third-largest Army Aviation Power in the world in just ten years, not only by being equipped with 800 of the latest and most advanced AB.205, AB.206, Bell 214, AH-1J and CH-47C helicopters but thanks to thousands of skilful and knowledgeable personnel. Iranian Army Aviation was used to provide for the security of Iran as well as helping to establish peace in Pakistan and Oman in the wars against terrorism and communism in 1970s. After the Revolution, and even after the execution, arrest and dismissal of the architects of the force, it was effectively used to defend Iran during eight years of war with Iraq, 1980-88. Its AH-1Js hunted hundreds of Iraqi tanks and armoured carriers and its Bell 214As saved lives of thousands of wounded civilians and soldiers while the CH-47Cs were airlifting ammunition and soldiers to the frontline under the threat of direct fire from Iraqi AA guns and SAMs. Based on the recently declassified official records of the Iranian Joint Chiefs of Staff, Ground Force and Army Aviation, this book provides details of the Iranian Army Aviation missions and roles during 97 major operations in the war with Iraq, including details on logged flying hours, performed sorties, launched missiles, carried cargos, wounded troops and soldiers beside the unheard history of the force since its foundation. The author's detailed text is fully supported by an extensive selection of previous unseen photographs and colour profiles.