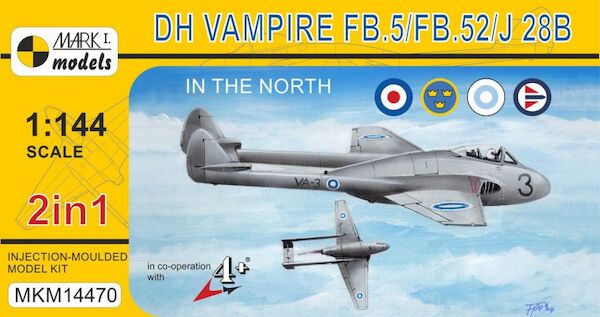 This product was added to our database on Monday 3 july 2017.

The de Havilland Vampire was a British jet fighter developed during WWII. It was the second jet, after the Gloster Meteor, operated by the RAF. The Vampire Mk.5, which flew in June 1948, was a fighter-bomber modified from a Vampire F.3 fighter.
It was a single-seat monoplane aircraft, of a combined wood-and-metal construction, powered by a DH Goblin turbojet. It featured twin-boom tail configuration with two wing-root intakes, bubble canopy and was fitted with a non-ejection seat. Two external tanks or 500lb bombs could be carried under the wing, while eight 3" RPs could be attached inboard of the booms.
The Vampire replaced wartime piston-engine fighters and was in front-line service until 1953. The Vampire FB.5 equipped many RAF units in Europe, the Middle East and the Far East.
Almost 3,300 Vampires of all marks were manufactured, a quarter of them built under licence in other countries. It was also sold to many nations and operated in a wide range of environments around the world.
Colour schemes included in the kit:
1) de Havilland DH.100 Vampire FB Mk.5, WG833, No.603 (City of Edinburgh) Sq., Royal Auxiliary Air Force, Turnhouse airfield, 1954-57
2) DH 100 Vampire J 28B (FB Mk.50), 28317, 18-Red A, Flygflottilj 18 (Wing F 18), Royal Swedish Air Force (Flygvapnet), Tullinge Air Base, spring 1953
3) de Havilland DH.100 Vampire FB Mk.52, VA-3, Black 3, HavLv 11 (Fighter Sq.), Finnish Air Force (Ilmavoimat), Pori airfield, 1953
4) de Havilland DH.100 Vampire FB Mk.52, V0126, Black ZK-X, 337 skvadron (Sq.), Royal Norwegian Air Force (Luftforsvaret), Vćrnes Air Station, 1953

Two injection-moulded kits are supplied in this box and each kit contains 31 parts and three clear parts (the cockpit canopy and position lights). A comprehensive decal sheet is included.