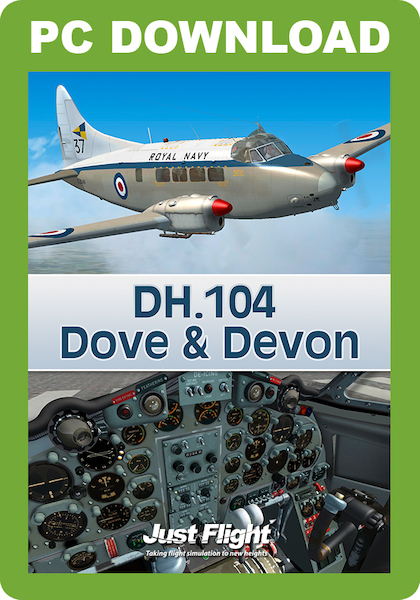 Product Information:
This DH.104 Dove and Devon collection for FSX and P3D includes five variants in a total of six liveries, with analogue and modern digital avionics options.

A direct descendant of the famous 'Wooden Wonder', de Havilland's Mosquito fighter/bomber, the Dove was developed by the same designer, R. E. Bishop, who was also responsible for the DH Comet racer and the awesome Comet jet airliner. An all-metal monoplane design, the aircraft was built as a short-haul passenger and executive transport to replace the successful Dragon Rapide biplane. The Dove first flew on September 25, 1945. An immediate success, many Doves were sold from 1946 on with Argentina placing orders for 70 examples.

An initial 30 examples were delivered to the Royal Air Force, suitably converted and equipped as light transports. Named the 'Devon', the Royal Navy also operated them as transport and liaison aircraft. The Royal New Zealand Air Force operated modified Devons for many years, in fact right up to the 1970s where they were used as training machines.

DH.104 Dove Mk5/6
The cockpit now had a solid plastic/fibre roof which was painted. Many of these versions were continually upgraded in service and went on to fly with private companies as air taxis and executive transports. In this simulation you will also find a Mk.6 with modern avionics for those wishing to have modern conveniences in their classic.

DH.104 Dove Mk.8
The last version of the Gypsy Queen powered Doves, built primarily for the US market. The cockpit roof was lengthened and the roof aerials removed in favour of more modern types.

DH Devon C Mk.1 and Sea Devon C Mk. 20
As operated by the Royal Air Force and Royal Navy. These examples have the military specification cockpits, designed for a single pilot and navigator/engineer seats. The copilot had a large DeccaLog analogue flight recorder with moving pen and a complex system of dials and controls to plot the flight.

DH Devon C20 RNZAF
This is a unique variant of the Devon, built specifically for the Royal New Zealand Air Force. It is fitted with a large navigation Plexiglass dome atop the fuselage and a big viewing bubble in the forward starboard window. The wings are dominated by two three-mast aerial arrays mounted on the top surfaces and below the nose is a long tube which houses the 'LongWire' antenna, a navigational training aid.

Analoque and Digital Avionics:
In the included Dove Mk.6 there are two versions of the avionics: a conventional analogue set and a modern set of digital avionics for comms and navigation use, including a handy flight monitoring computer. Digital avionics default in the Dove Mk.8.

Liveries:
A set of six high quality liveries are included:

LTU
Type – Dove Mk.8
Registration number – D-INKA
In the simulation this model is fitted with a set of modern digital avionics.

Paintkit:
A Pro quality paintkit enables you to create your own favourite schemes (Photoshop or compatible program required).