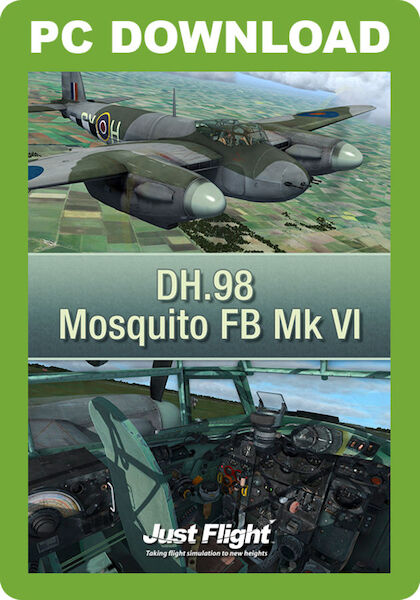 PRODUCT INFORMATION
7,781 examples of the Mosquito were produced in a total of 43 variants. The most popular variant was the Mk VI fighter bomber (FB) featured in this add-on, which was armed with four 20mm Hispano cannons and four .303 Browning machine guns in the nose section. A total of 2,292 examples of this version were built.

The pressures of supply and demand in a wartime environment can give birth to some extraordinary thinking. This was certainly the case with the design and development of the de Havilland Mosquito.

At a time when the metal producing resources of Great Britain were stretched to their limits, the designers at the de Havilland Aircraft Company came up with the idea of building the majority of an airframe from multi-layered plywood skins. Using the resources of an under-utilised furniture industry, the components could be constructed relatively easily with raw materials in plentiful supply.

So it was that the de Havilland Mosquito was designed around a cold-moulded plywood fuselage. The bulk of the construction, including the one-piece wings, employed the laminated ply and hardwood components – with metal only being used for the critical joints and engine mounts, brackets and screws.

Another benefit of using balsa wood and Canadian birch laminated plywood in the construction was a significant reduction in the weight of the finished airframe. This weight reduction, in combination with the aircraft's two mighty Rolls-Royce Merlin 25 engines, resulted in excellent performance. Because of its speed, the Mossie was used on countless covert operations. Notable actions include the raid on the prison at Amiens dubbed 'Operation Jericho' and the infamous raid on the Gestapo headquarters in Denmark in 1945.


REVIEW
"This offering is excellent value for money. It is priced lower than some top end military add-ons which are available, nonetheless it matches many of them in quality and complexity... The detail on the aircraft's more complex parts, such as the undercarriage, is superb, with some amazing detail included... The detail displayed across the external model is exceptionally fine... General wear and tear is well represented and gives the cockpit a very true to life feel... The sounds in this package are very convincing... No discernible performance or frame rate cost at all with good simulator performance in all tested situations... It is good to see such a comprehensive document set, which is augmented by the aircraft's kneeboard that has the checklists, reference information and a key guide."
Mutley's Hangar, 9.5/10 Gold Award