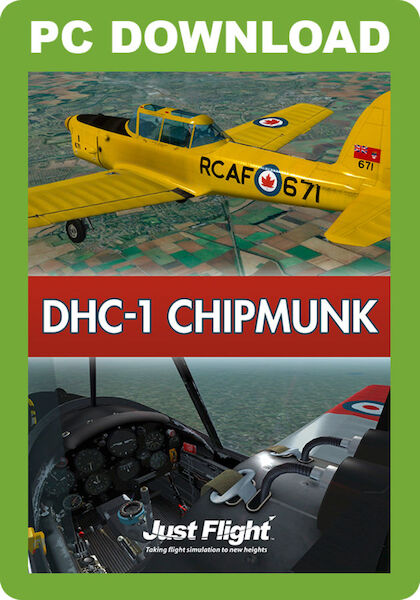 The DHC Chipmunk was designed by engineers at the Canadian offices of the De Havilland Aircraft Company and became the RAF's military trainer of choice in the 1950s, replacing the rugged and reliable Tiger Moth.

The DHC-1 is an all-metal fuselage, low-wing, two-seat trainer, and although its roots are easily traceable to the Tiger, it's more powerful, more responsive and much stronger. The cockpits are a little more sophisticated than the Tiger's but retain a simple layout for easy familiarisation.

The design has been the subject of continual upgrades, including turboprops, bubble canopies and other aerodynamic improvements, and has proven so adaptable and reliable that it continues today to be a most successful aero club trainer, aerobatic champion, crop-sprayer, glider tug and commuter transport!

This model is an extremely accurate rendition of the real aircraft with lots of authentic detail, including an opening engine hatch which reveals a beautifully modelled Gypsy engine. Even the disc brakes have been accurately modelled, with individual brake pads in the calipers.
The canopy is fully functional, with working release handles, emergency hatch releases and an animated cable-catch mechanism.

All flying surfaces are fitted with correctly working hinges and actuating levers.

The wing surfaces use special texture materials which replicate the aircraft's fabric and metal construction. Where fabric is the covering material, these specially created materials render a realistic 'stretched, doped linen' appearance which changes with the ambient lighting.

Two lifelike, animated pilots (in civilian or military attire) occupy the cockpit and can be removed on the fly, allowing a better view of the cockpit detail.

All gauges, switches and levers are animated when viewed from the exterior view.

Numerous other features including chocks, tie-down, GPU and optional navigation instruments in the rear cockpit.

Fly from either the front or the rear cockpit. An enormous amount of effort has gone into the cockpits to replicate all the detailed fittings and functional equipment of the real aircraft.
'Cold and dark' starts are possible and utilise either ground power unit or battery systems

Every detail for all the switches, knobs and levers of the real aircraft is authentically reproduced and all work just like the real thing. It is possible to follow the real-world Pilot's Notes when flying this simulation.

Although a primary flight trainer, this Chipmunk has an optional navigation kit which is switchable and mounted in the rear cockpit, making basic VOR/LOC navigation possible.

There is a demountable GPS unit and authentic P8 compass for basic flight planning.

Accuracy in the cockpit extends to the emergency in-flight canopy-opening function. This takes the form of a small panel mounted in the roof which opens to equalise the air pressure, making it possible to open the canopy during flight.

Flap control levers have the correct, working cable and pulley system. The fire extinguishers operate and the air vent controls, instrument caging and fully detailed throttle and mixture quadrant, levers and rods are all functional.

Detail extends to textured leather-covered crash-pads over the panels and full harness–style seatbelts with quick release.