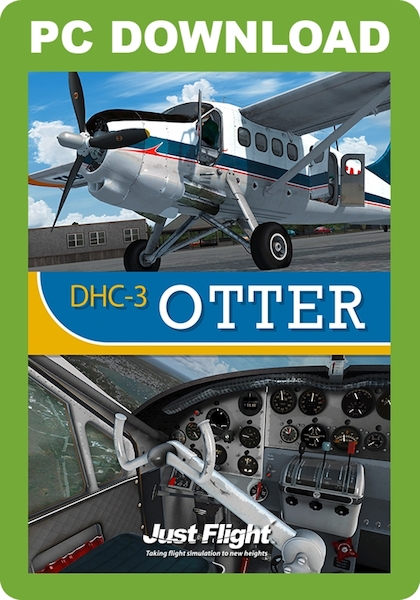 This product was added to our database on Wednesday 6 December 2017.

The DHC-3 Otter is a single engine, high-wing aircraft designed for short take-off and landing (STOL) operations. Developed as a successor to the popular DHC-2 Beaver, it shares the same configuration but with a larger wing, fuselage and a significantly greater operating weight. It is powered by a R-1340 radial engine and it can seat up to eleven passengers and a variety of cargo, including ski-doos and motocross bikes destined for remote areas which are inaccessible to less rugged aircraft. A total of 466 were built between 1951 and 1967.

This DHC-3 Otter package includes wheel, amphibian, float and ski variants of the aircraft, and classic and modern cockpit configurations.

Choice of cockpits:
- Classic – traditional configuration with Collins avionics
- Modern – featuring HSI, GNS 430, digital radios and autopilot
Fully modelled passenger cabin area with a variety of interesting deployable cargo, including a ski-doo and motocross bikes
Highly detailed cockpit with uniquely rendered metal effects, realistic wear and tear, and dynamic specular effects on surfaces
Instruments constructed fully in 3D with smooth animations
Realistic systems functionality including engine start and fuel tank selection
Functional electrical or standby hand-crank engine start systems
'Cold and dark' switch for automatically configuring the aircraft in a cold/dark state
Avionics include autopilot functionality from the operating period with NAV and ILS approaches, VOR and ADF receivers and displays, transponder and a full communications suite
Many features have been added to help with usability such as switches to hide the control column for a better view of the instruments and pre-set angled views for easy access to controls
Accurately modelled 'throw-over' type control column which can be operated from either the left or right seat