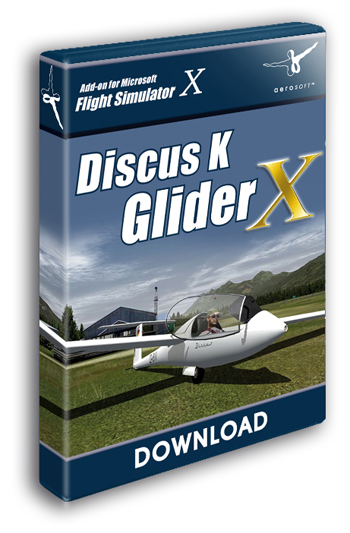 Product description
Aerobatic gliding is perhaps the most complex and demanding of aviation sports. It`s hard enough with an engine but doing it all on kinetic energy demands a very high degree of skill. And a suitable aircraft and finally there is one for FS!

This product shares it`s base with the Discus Glider X (a separate product) that got the most spectacular reviews and even managed to get the AVSIM Gold Star Award!

The Discus is a Standard Class glider created by Schempp-Hirth. It was produced in Germany between 1984 and 1995 and around 850 aircraft are still flying. It is still produced in the Czech Republic in low numbers. With its distinctive swept back leading edge it was rather revolutionary when it was produced and it totally dominated the standard class sailplane racing throughout the 1980s and won the 1985, 1987 and 1989 World Gliding Championships.

Though it is no longer a top contender for the prices (the progress in gliders in the last 10 years is nothing short of amazing), it is still a high performance glider with a 42 to 1 glide ratio. The good natured flight characteristics made it a perfect club glider for the experienced gliders. The later models (though many are retrofitted) had winglets that made the performance and handling better. In Europe it is one of the most prolific gliders and it is very typical of gliders that the thousands of enthusiasts fly every weekend.

The K model was one of the last versions of the Discus and an attempt to create a capable aerobatic contest version. They used one of the prototypes and the Discus K flew for the first time in 1988. It was moderately successful, but for most FSX pilots it will be more than a handful!

The Aerosoft Discus has been create with help from Schempp-Hirth and without a doubt it is the first true high end glider add-on for FS. From the flight model that is near perfect (do note we never used these words for any product before) to the high detail modeling, it’s a product without rivals and without precedent.

Fully professional development (over 20 months).
Highly detailed model (for example just the VC has 146384 polygons, more than double of what FS2004 could compile) using all the FSX options.
Highly advanced flight model that are accurate even in spins and other no standard attitudes.
Over 100 non standard sounds (like flying with open windows, side slips, pending stalls etc) all triggered by FSX variables and conditions using Aerosoft Sound Control.
Dozens of non standard animations, up to elements that move under high G load.
Very realistic flexing wings created with a new technology.
All instruments accurate. Not like this simplified gauges in the default glider in FSX.
Real usable yaw string that will make coordinated flight a lot easier.
Owners of the Discus Glider X get 30% discount (Just enter the serial key of the Discus Glider X during the order process).