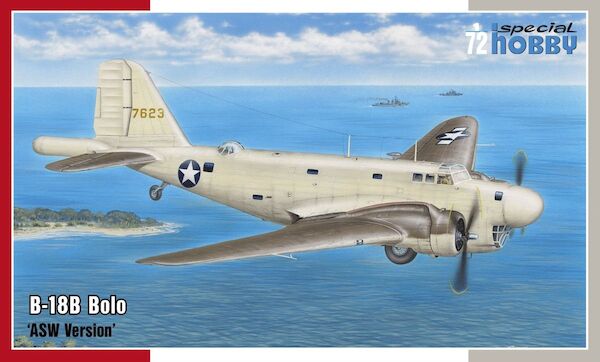 Douglas B-18A Bolo "At War". According to 1934 specifications issued by USAAC High command B-18 Bolo was designed. The DB-1 (factory designation) design was derived from the design of the famous civil Dc-2 aircraft. Unlike Dc-2, the DB-1 was mid-wing design with bomb bay located in the fuselage under the wing's cross section and defensive armament consisting of three 7.65 mm machine guns located in manually operated nose and dorsal turrets and one in ventral hatch. Except of the initial batch later on, additional machines were ordered under designation B-18A. These new machines featured new, picked nose and new dorsal turret. In total 350 B-18s were ordered but only 312 machines were produced. B-18A Bolo then became the most widely used US bomber of the pre war era. Bolos were stationed in continental USA so at Hawaii and Philippines. When the war broke out, part of the Bolos stationed at Hawaii and Philippines was destroyed by sudden Japanese attacks. The rest of the machines were used by Us Army for antisubmarine patrols in both US coastal waters and Panama Canal area and, also for training. Except of US Army, Bolos were used by Canadian Air Force (code name Digby Mk.I you can purchase this Canadian version cat. no. SH72251) and Brazilian Air Force. This is the first injection kit of B-18 ever produced. The kit contains four sprues with plastic parts, injected clear parts, resin and photo-etched parts. Decals included offer markings for 3 US Army machines and Brazilian. The Brazilian and one of the US machines (No.61 based at Philippines) are in overall natural metal finish, the other two sport camouflage. One of the latter operated in Panama, the other one features white crosses, the marking of particular combat exercise.