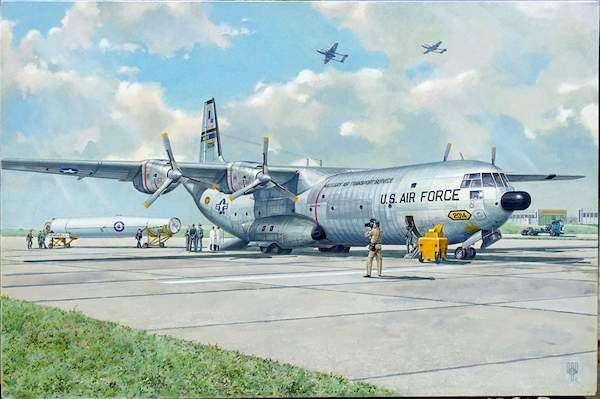 In 1952, procurement of a new type for the Military Air Transport Service was announced in the United States under the SS402L Logistics Carrier Support Program. According to its requirements, the aircraft would have to lift more than 45 tons, including oversized items.
The Douglas Aircraft Company, which has a long history of supplying transport aircraft to the military, proposed two projects, the C-132 and the C-133. The C-132 was rejected due to a number of technical problems, and the C-133 immediately received an order for a preliminary batch of 12 machines, even without building a prototype for testing. Construction of the first aircraft began at the end of 1953, and on April 23, 1956, the first test flight of the new giant took place. After a few shortcomings were eliminated, the C-133 went into series production, officially named the Cargomaster, and as early as August 1957, the 39th Transportation Brigade at Dover Air Force Base in Delaware was the first to receive a production aircraft, while the next machine of this type was delivered to the 84th Brigade based at McCord.
Intensive operation of the C-133 began in 1958. The world was already on the verge of widespread confrontation, especially in Europe, where the US and USSR were vying for influence over the entire region. The C-133 was the only type that could carry nearly 100 percent of US military equipment, including most of its principal armored vehicles, and so its role in transferring military units to Europe was particularly important at this time.
During series production of the C-133, its design was constantly modified to improve performance, in particular to increase its load capacity or to transport an ever increasing range of oversized loads. Starting from the eighth airframe, the tail section was slightly modified, and from the 33rd aircraft, the shape of the cargo compartment door was changed, now being split down the middle to open to each side. This made it possible to transport the assembled Atlas, Titan, and Minuteman missiles, because beforehand they were transported exclusively by road.
The last 15, making a total of 50 aircraft, were designated C-133B. Like the later C-133A, they had double doors in the tail, which made it possible to enlarge the range of loaded military equipment. This was especially important for the carriage of missiles, since their outer dimensions were as close as possible to the internal dimensions of the cargo compartment of the aircraft. The main difference of the C-133B was the much more powerful Pratt & Whitney T34-P-9W engines of 7,500hp each, which greatly improved the basic flying characteristics of the airplane.
The C-133B together with the C-133A were heavily used for strategic transportation of military equipment from the US to Western Europe, and they also had to perform many military transport flights to Southeast Asia during the long war in Vietnam. The use of these aircraft was very intensive, which obviously contributed to the accelerated wear of the structure.
As one of the measures to strengthen the structure external tightening strips of thin metal were used on the frames of the fore section of the fuselage, but this forced measure only improved the situation for a short time.
Already by the late 1960s, after careful examination, it emerged that the C-133 had numerous points of fatigue and the possibility of an air crash at any time could not be eliminated. All the C-133s were immediately decommissioned. For security reasons, the military decided to extend the use of other transport platforms, the smaller but more reliable C-130s and C-141s. In addition, testing of the ultraheavy Lockheed C-5A Galaxy had already been completed and serial construction had begun, and the C-5A exceeded the capabilities of the C-133 in every measure. Attempts to use the C-133 in the field of civil freight were unsuccessful for safety reasons.
After the successful tests of the C-5 Galaxy, the fate of all the serviceable C-133 airframes was finally resolved - they were completely decommissioned and transferred to storage bases or immediately to aviation museums.
In total, 15 aircraft of the C-133B version were manufactured.