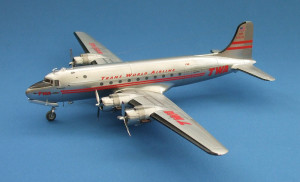 This product was added to our database on Thursday 4 february 2016.


The legendary C-54 was used for intercontinental transport operations and set numerous records. She was the first mass produced four-engine aircraft to make trans-atlantic crossings. The Douglas Aircraft Company began development of the DC-4 passenger aircraft in 1938. This was changed to become the C-54 long-range military transport aircraft after the United States entered the war in 1942. A total of 1,160 C-54 aircraft have been built. First flights across the Pacific to resupply troops fighting against the Japanese and repatriate the wounded began in 1942. Numerous modifications and special versions made the C-54 one of the most versatile of all military aircraft. Amongst other missions it also served as the President's airplane.
The C-54 achieved special recognition during the Berlin Airlift when it became known as the Candy Bomber . It was used to completely resupply the three Western Sectors of the city during 1948 -1949