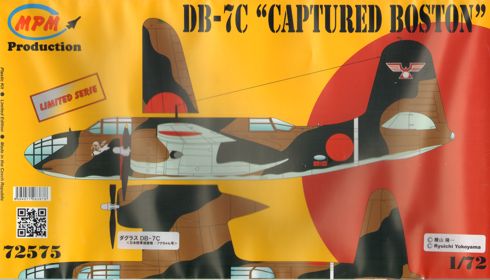 This product was added to our database on Friday 13 December 2013.

Douglas DB-7C "Japanese Fuku Chan Manga" Captured Boston. Limited series to 500 pcs. When Netherlands were occupied Dutch East Indies as the main Dutch colony came into very complicated situation. The war in Pacific was imminent. Therefore the officials tried to make every possible step to enhance the defence. This involved particularly high orders of US aircraft of all categories. Among these orders also DB-7C (US military designation was A-20C, British Boston Mk.III) twin-engined bombers were ordered. The first batch of these machines reached its destination in dismantled condition. Nevertheless, this batch was seized by Japanese invaders; the rest of the ordered machines were diverted to Australia where these DB-7Cs were allocated to RAAF No. 22 Squadron. Japanese assembled several machines and thoroughly tested them by both Army and Navy air forces. DB-7C limited series kit contains decals for machine that was tested by Japanese Army Air Force. This machine was decorated by Fuku Chan artwork from that time famous comics.