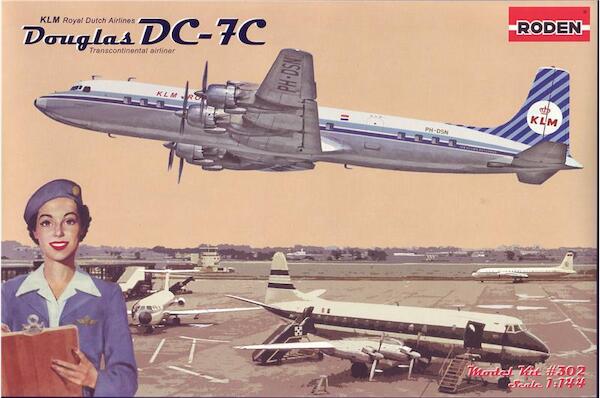 This product was added to our database on Friday 4 November 2011.

The end of WWII and the transition of the international community to normal daily life gave dramatic impetus to the development of tourism and international travel, and air transportation was bound to play an important role in it. If a trip in an aircraft was possible only for a narrow section of society before the war, in other words for the rich, now the main aim was mass transportation, with the best possible comfort and convenience during journeys.
The leading airlines of the U.S., such as TWA and Pan Am, had long competed for the right to provide the maximum number of flights within the country, and in the postwar years the need to provide a completely new kind of airline came to the fore; one offering intercontinental travel between America and Europe. TWA made a bid for a new aircraft from the Lockheed company, the famous Constellation. Pan Am, which cooperated for a long time with the Douglas company, back in 1946 received the first Douglas DC-6, which for several years afterwards was the flagship of the company. Determined to concede nothing to its competitors, Pan Am ordered an improved version of Douglas DC-6, which appeared in May of 1953 and was known as the DC-7. The aircraft greatly resembled its predecessor, though it featured a number of innovations, still not commonplace in civilian aircraft, such as radar.
Earlier versions of the DC-7 could stay up in the air for up to 8 hours, which made it possible to make flights easily from one coast of America to the other, but they were still incapable of intercontinental flight, and only the appearance of the DC-7C variant in 1956, named 'Seven Seas', finally allowed regular flights from the majority of American cities to European capitals. In comparison with its predecessors the DC-7C was 40 inches (1.02m) longer, making possible the installation of an additional number of seats in the cabin. Some European airlines were interested in this airplane such as SAS in Scandinavia, and also the Japanese JAL; and for some period of time it was operated by the leading Dutch carrier KLM.
The success of the DC-7C was loud, but brief. The era of jet aviation was coming. The appearance of the epochal Boeing 707 quickly pushed all other types of aircraft with reciprocating engines into the background. Although absolutely not conceding anything to the newcomer in comfort, they could not compete with it in speed, and soon they began to be converted into cargo planes, planes for firefighting, and some machines were even taken on by the U.S. military for special duties. In spite of a very short period of service in its main role, some DC-7's could still be seen in the sky even at the end of the twentieth century when they continued to be operated in various African countries.