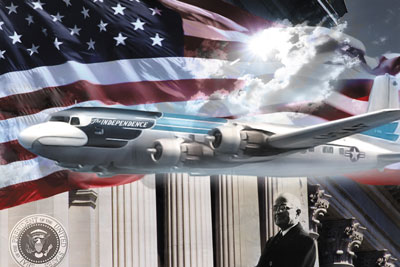 In 1944 the Douglas company designed the C-112, a development of its precursor, the well-known C-54 transport aircraft. The civilian version of the C-112 was named the DC-6 and by 1946 had already successfully passed its tests. The following year the first production aircraft were delivered to customers, among whom were leading U.S. carriers such as United Airlines and Pan American. Series production lasted until 1958, during which time manufacturing plants released more than 500 aircraft of the different versions of the type, the most common of which was the DC-6B.
The U.S. military, which after the end of WWII canceled a number of contracts for the purchase of new machines, renewed its interest in this promising transport aircraft. After some changes to the design of the 'military DC-6', given the new designation of C-118, they were delivered to the U.S. Air Force and Navy. 166 military machines were built over the next few years. Aircraft for the U.S. Air Force were designated C-118A and C-118B, while Navy aircraft were designated R6D.
Once the construction of aircraft became more reliable, almost all heads of states around the world began using them as a quick and convenient way to move around the country and beyond their borders. Since the mid-thirties, U.S. presidents had quite naturally always had the newest and the most modern aircraft for their needs. It should be noted that President Theodore Roosevelt in 1910 was the first head of state who ventured to fly, with the Wright brothers; and President Franklin Roosevelt constantly flew during WWII, in a C-54 specially designed for him. Harry S. Truman was the next president after the death of F.D. Roosevelt. The beginning of his presidency coincided with a quite difficult historical moment, the end of hostilities in Europe. During the Potsdam Conference in July of 1945 Truman, who was much sharper in relation to the Soviet Union, unlike his predecessor, made it clear to the Soviet leadership that the U.S. had a completely new type of weapon which could radically change the course of world history in case of unjustified encroachment by the Soviet Union on the territories of Europe. Thus began the history of the Cold War, which was to last for more than half a century. Harry Truman is also prominent in U.S. history as the president when the famous Marshall Plan was adopted and NATO was founded. It led to an end of expansion by the Soviet Union and created a foundation for the development of real democracy in Europe. However, the Korean War, which began in 1950, significantly undermined public confidence in the head of state. Harry Truman did not stand for election in 1952, and he was succeeded by a famous war hero, Dwight Eisenhower. Despite this, Harry S. Truman is today considered as one of the greatest American presidents in history.
The twenty-ninth C-118 built was delivered to the aircraft fleet of the Presidental administration. After certain additional work by the secret services it was named the "Independence" and a huge white eagle was painted on the fuselage - the bird that symbolized American power. The cabin of the aircraft had 24 passenger seats, and additional recreation space with 12 chairs, and also a working room for the head of state. More fuselage space was outfitted with various pieces of special equipment. Harry Truman used this VC-118 (ie. 'V' as in 'V.I.P.') for the full term of his presidency.