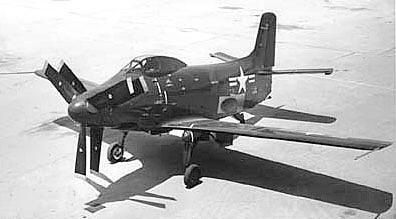 In June 1945, with the success of the high performance AD Skyraider, the US Navy asked Douglas to design a new version of the AD with turbo-prop power, and selected Allison to design the power-plant. Allison proposed to install a pair of nose mounted engines to drive two contra-rotating propellers. In cruise flight, one of the engines and propellers could be shut down to increase the flight range. In 1947, two prototypes - designated XA2D-1 Skyshark - were ordered. The first flight was made in 1950. Performance was satisfactory but an engine vibration problem appeared. With the outbreak of the Korean War, the US Navy needed a new carrier based attack aircraft; the A2D-1 was ordered into production. However, the engine problem persisted and the first prototype crashed. The flight tests continued until one of the pre-production aircraft crashed in 1954. After that incident, the A2D-1 never flew again