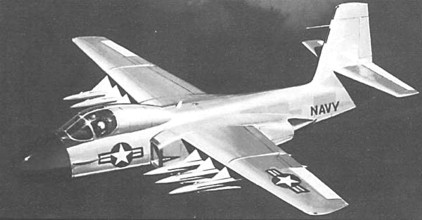 This product was added to our database on Monday 14 January 2008.

In 1957, the U.S. Navy began to plan a new concept for airborne fleet defense. A large subsonic interceptor with a powerful radar was to be equipped with very long range high speed air-to-air missiles to shoot down approaching Soviet strike aircrafts and bombers. In 1958, Bendix and Grumman were selected as contractors for the AAM-N-10 Eagle missile. A year later the Douglas XF6D-1 Missileer design was chosen for the launch platform with an order for two prototypes. The most important feature of the XF6D-1 was its Westinghouse AN/APQ-81 pulse-doppler radar, the first track-while-scan radar developed for a fighter aircraft. In 1960, the Navy development organizations became convinced that the XF6D-1 was too expensive, and changed in favor of exploring the feasibility of using the F-111B. The Eagle missile program faltered as well. The XF6D-1 and Eagle missiles were both put on hold in December of 1960, before any XAAM-N-10 prototypes could be tested. However, the idea of a long-range fleet-defense interceptor was realized later with the F-14 Tomcat and the AAM-N-11/AIM-54 Phoenix missile.