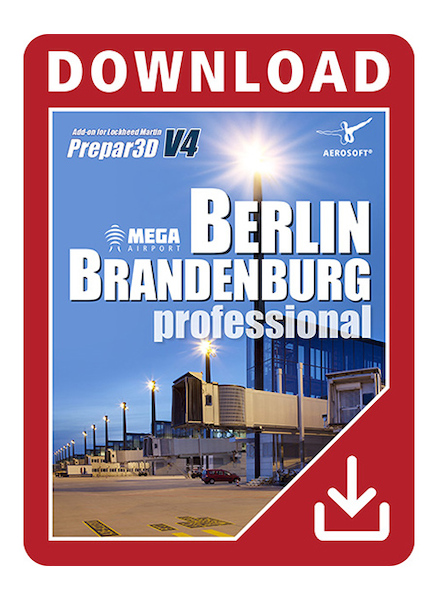 Product information:
"Mega Airport Berlin-Brandenburg professional" (version 1.0)
After the development of the first add-on of Berlin Brandenburg airport was concluded in 2014, the first rework of BER has now been finalized. Yes, that´s absolutely true. The brand new add-on "Mega Airport Berlin Brandenburg professional" is here for you to land at probably Europe's largest airport construction site as an improved and extended version to Prepar3D V4/V5.

From the very beginning Berlin Brandenburg Airport was not a very lucky project. Construction work began in September 2006 and the opening to the public was scheduled for October 2011. By now the construction progress lags almost six and a half years behind the initial schedule and costs have been skyrocketing ever since. The airport has suffered from continued delays, thus it is far from completion and as of now an opening date is still not in sight.

The add-on Mega Airport Berlin Brandenburg professional covers the existing Airport Berlin Schönefeld as well as the adjacent new international airport. A simple tool makes it easy to switch between the current status and one where the new airport is already open. In addition to the impressive feature list of the FSX version, this professional edition includes dynamic lights, automatic seasonal scenery adaptations, automatic bad weather switching of the airport lighting, and more new P3D specific functions.

Important notice:
After the product has been purchased, the product can be installed with the obtained serial number via Aerosoft One.
This requires an internet connection and an Aerosoft user account!