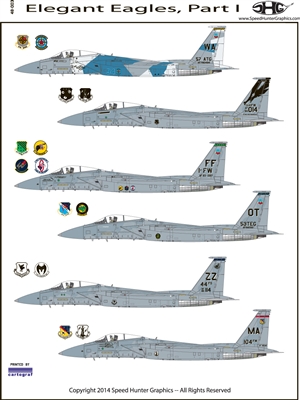 This product was added to our database on Friday 30 January 2015.

Mind: this item is a decal sheet that serves to decorate a scalemodel.áThe scalemodel is not included and needs to be ordered separately.

Product description
Enough markings options to satisfy any Eagle lover. Six F-15Cs are included on this sheet. Options include

Enough stencils included to build three Eagles, including such tiny details as ejection seat markings. Decals printed by Cartograf of Italy. Sized for the Hasegawa kit.