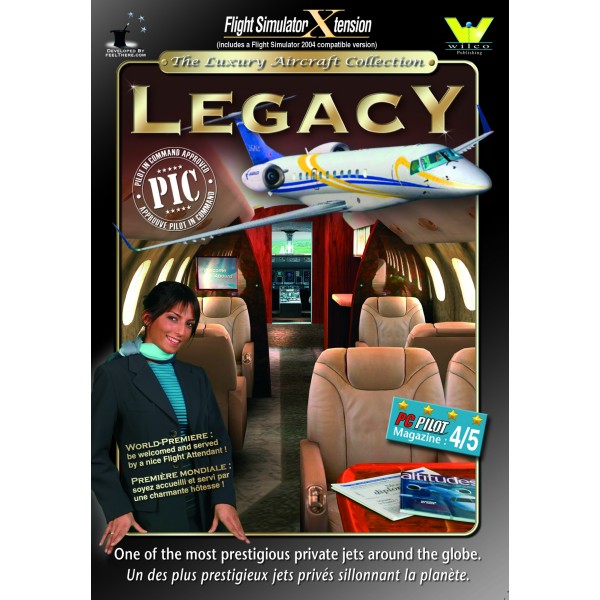 Product description
Break free and escape at the controls of one of the most prestigious private jets streaking around the globe: the Legacy.

This beautiful, elegant and powerful aircraft offers unrivalled piloting pleasure. It has a "New Generation" flight deck and boasts the latest technological advances: simulation of all on-board systems, head-up display navigation, complete and ultra-realistic flight computer, and much more besides.

With an interior offering the pinnacle of in-flight comfort (swimming pool as an option!), join the Jet Set of modern aviation.
A charming stewardess will welcome you as you arrive on the tarmac. Climb aboard and make yourself comfortable.
The supple leathers, fine hardwoods and many high-tech fittings used contribute to the cordial atmosphere which will enchant you during the flight.

Only a lucky few get the chance to pilot such a plane, wander around its luxurious interior or be served by its stewardess.

Do not miss this opportunity which is too often only for a select few!

The LEGACY is part of Wilco Publishing's "Luxury Aircraft Collection".
The quality of its development is what enables Wilco Publishing to give it the Pilot in Command label, making it the most realistic companion to Microsoft® Flight Simulator.

The LEGACY will delight beginners and the most discriminating purists alike.

A Luxury Set of Aircraft Features


A Luxury Set of Panel Features


A Luxury Set of Systems Features

Embraer's Legacy is the advanced version of the company's venerable ERJ-135.
The changes include the addition of winglets (for added lift and drag reduction) and fuselage strakes, underbelly and cargo compartment tanks, higher-rated turbofan engines, new fuel system, higher maximum Mach operation (MMO), an entirely new main cabin and advanced avionics suite (IRS, HUD,...).
With a 3,100 Nm range, the Legacy is capable of New York to London, Singapore to Tokyo or London to Riyadh nonstop.
Embraer launched the Legacy program at the Farnborough Air Show in the UK in July 2000 and its maiden flight took place less than one year later in April 2001.