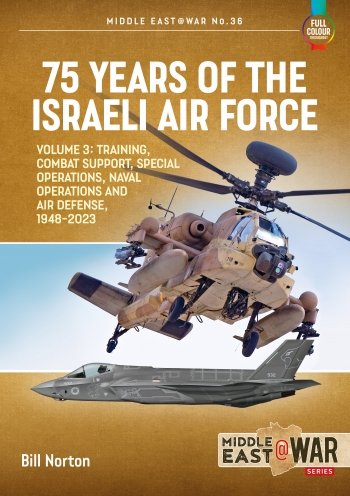 The Israeli Air Force grew from humble beginnings to one of the largest and most experienced air combat teams in the world. This came through several major and minor wars with its Arab neighbors, almost continuous military actions short of war, and preparation for power-projection operations unusual for so small a nation. The 75-year history of the Israeli Air Force is, then, a fascinating study of a relatively small military organization working to meet shifting obligations under multiple impediments while being repeatedly tested in combat. Many factors over the decades shaped the air fighting capability, not the least being the demands of the evolving battlefield, uncertain funding, available weapons, and quality of personnel. Tactics and doctrine were, in turn, shaped by government policies, international pressures, and confronting adversaries likewise evolving. When the trials in war or combat short of war came, success was a measure in relevance of the service's weapons, adequacy of training, and experience of personnel.

As a companion to Volumes 1 and 2 giving the chronological history of the Israeli Air Force, this third volume details special topics underscoring the service's capability growth. These richly illustrated topics are flight training, photo reconnaissance, aerial refueling, electronic warfare, support of Special Forces, support of the Navy, and the Air Defence Forces. A summary of aircraft that served with the Israeli Air Force is provided, with a photograph of each type and major models. A summary of all IAF air-to-air "kills" is also included.

Written at a time of historical changes for the air force, and the Israel Defense Forces as a whole, this volume informs understanding of the service emerging and operating in future years. Backed by official and unofficial histories published in the last 20 years, and the unprecedented openness in the past few decades, the author has worked to make this account more accurate and complete than those of the past. It also stands apart from many other books in performing this examination in a more dispassionate and critical manner, without the common hyperbole.