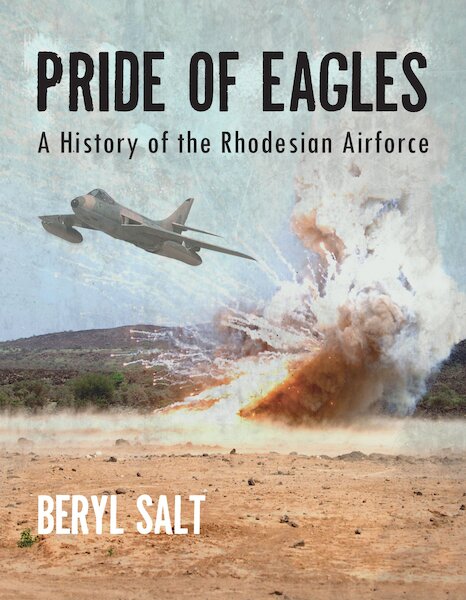 A Pride of Eagles. A History of the Rhodesian Air Force

This is the story of military aviation in Rhodesia from the romantic days of 'bush' flying in the 1920s and '30s-when aircraft were refuelled from jerrycans and landing grounds were often the local golf course-to the disbandment of the Rhodesian Air Force (RhAF) on Zimbabwean independence in 1980. In 1939 the tiny Royal Rhodesian Air Force (RRAF) became the first to take up battle stations even before the outbreak of the Second World War. The three Rhodesian squadrons served with distinction in East Africa, the Western Desert, Italy and Western Europe. At home Rhodesia became a vast training ground for airmen from across the Empire-from Britain, the Commonwealth and even Greece.

After the war, Rhodesia, on a negligible budget, rebuilt its air force, equipping it with Ansons, Spitfires, Vampires, Canberras, Hunters and Alouettes. Following UDI, the unilateral declaration of independence from Britain in 1965, international sanctions were imposed, resulting in many remarkable and groundbreaking innovations, particularly in the way of ordnance. The bitter 'bush war' followed in the late 1960s and '70s, with the RhAF in the vanguard of local counter-insurgency operations and audacious pre-emptive strikes against vast guerrilla bases in neighbouring Mozambique, Zambia and Botswana and as far afield as Angola and Tanzania. With its ageing fleet, including C-47 'Dakotas' that had been at Arnhem, the RhAF was able to wreak untold havoc on the enemy, Mugabe's ZANLA and Nkomo's ZIPRA.

The late author took over 30 years in writing this book; the result is a comprehensive record that reflects the pride, professionalism and dedication of what were some of the world's finest airmen of their time.