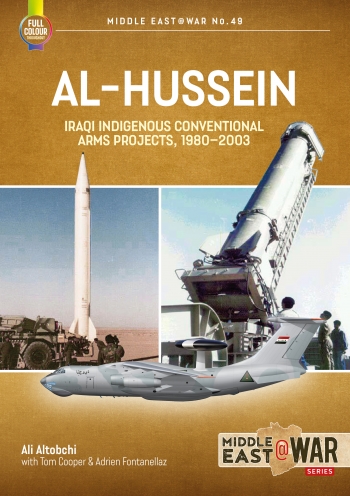 Always at the forefront of Arab states when it came to the development of its armed forces and armament industry, during the 1970s Iraq embarked on an ambitious program of becoming self-sufficient in production of almost all equipment and ammunition necessary for its armed forces. Indeed, during the following decade, many of the related projects became a necessity because of the lengthy and costly war with Iran. The most ambitious – and probably the best-known – such projects were related to the production of ballistic missiles: the efforts resulted in the construction of a factory for production of rocket propellant at Hillah and another for the assembly of ballistic missiles at Fallujah. A direct result emerged in early 1988, when Iraq deployed the al-Hussein ballistic missile (an extended-range variant of the Soviet-made R-17E 'Scud') to strike Tehran in Iran in the course of the so-called 'War of the Cities'.

However, al-Hussein was far from being the only such project. At the time Iraqi scientists and armament designers including Nassir al-Hindawi, Rihab at-Taha, and Huda Salih Mahdi Ammash were considered some of the best in the world, they became closely involved in cooperating with Brazil, resulting in the development of the Astros 2 (a copy of the Soviet-made Luna-M artillery rocket), and then embarked on the development of such advanced designs as the Liath and Ababil, and a solid-fuel ballistic missile; the al-Samoud 2.

Moreover, the Iraqis launched a project to develop indigenous early warning radar aircraft; anti-ballistic missiles; and cooperated with South Africa in the field of development of long-range artillery pieces like the GC-45 (in its GHN-45 variant). Indeed, within Project Babylon, the Iraqis cooperated with prominent Canadian artillery-expert Gerald Bull to develop the so-called 'super gun': a 1,000mm artillery piece expected to be able of reaching a range of 750km.

Written by one of the Iraqi engineers involved, and richly illustrated with photographs (many in colour) and specially commissioned artworks, al-Hussein is the first-hand account of these and many other indigenous Iraqi armament projects.