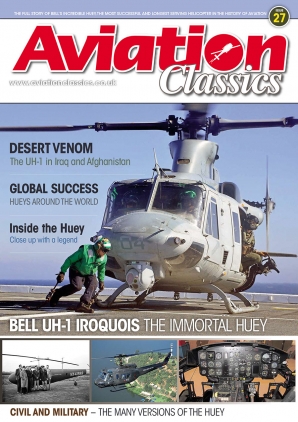 The success of the Bell Huey family is an astounding achievement in rotary winged design; some of the first helicopters built in the 1960s are still in regular use today.

Firstly, I have to apologise to the readers who were expecting the Huey to be the subject of the last issue, I am afraid I broke my left arm rather badly in an accident so was unable to complete the work in time. I would like to offer my thanks to Dan Sharp who filled in with the Focke-Wulf Fw 190 issue so well, and to surgeon Nick Gillham who made such an excellent job of putting me back together again. I would also like to thank my physiotherapist, Harriet, for her patience!

To the subject of this issue, and what a subject it is. The story of Larry Bell and the company he built is one of the inspiring tales of aviation history, a man driven to work at the cutting edge of technology and the incredible machines he created. His support of Arthur Young in 1941 was to kick-start the development of rotary winged flight.

Helicopters today have become a common part of daily life in most cities, many different models filling the skies as they ply their trade for the police and ambulance services as well as the business and TV community among others. Among all of these varied machines, only a few helicopters have become part of the public consciousness, instantly recognisable wherever they appear.

The Huey and its variants first came to public attention in the news coverage of the Vietnam War, reinforced in modern culture through film and television shows, as well as through regular appearances saving lives or dousing fires on the news. The memorable scenes from movies such as Francis Ford Coppola's Apocalypse Now and Randall Wallace's We Were Soldiers are only part of the cultural popularity of the type, the physical appearance of the aircraft and its unmistakeable sounds are just as responsible for its iconic status.

The Huey sounds like no other helicopter, the early big twin bladed rotor making a deep repetitive thud over a high pitched turbine howl, the tail rotor interfering with its own beat as the aspect of the aircraft to the listener changes. The twin rotor gave way to the four bladed version it is true, but somehow the beat remains, albeit somewhat less basso profundo with a slightly faster tempo.

As to appearance, from the earliest incarnations the Huey had a 'face', a cheerful look and if anything this has increased in the most recent models. Aside from this slight anthropomorphisation, a very human trait with machines, the Huey has always looked solid, dependable. It inspires confidence just in the way it sits on the ground, let alone flies.

The engineering behind the aircraft is also responsible for its longevity in two most important respects. Firstly, the central pillar and twin spar structure enabled the Huey to be stretched like no other helicopter, resulting in a flexible range of models to suit widely varying customer needs. It also made the Huey incredibly strong and easy to work on, resulting in a long lived and very cost effective airframe, maintenance costs being low from the start.

Couple this with the powerful, light and fuel efficient T53 turbine engine and you have the first truly capable transport helicopter. Altogether, these traits have made the Huey popular with the public, operators and pilots, and have further translated so no museum seems complete without at least one of the helicopters in its collection.

On a personal note, I have been lucky enough to both fly and fly in a UH-1H and the later 412 versions of the aircraft and can tell you this, even a non-helicopter pilot such as myself found the Huey straightforward to understand and to operate. Not terribly accurately in my case it must be said, but that was my fault not the Huey's!

Having also been used as a rescue dummy by both SARTU and 84 Squadron in Cyprus, I can honestly say there is no helicopter I would rather be hanging underneath, as I said, the reputation for reliability just inspires confidence. With the latest version, the UH-1Y, giving excellent account of itself already in operations in the harsh climate of Afghanistan, the Huey is destined to be with us for many years to come and is likely to be the first helicopter to join the 100 club of aircraft with a century of service behind them.I would like to express my thanks to Dana Schenk and the team at Bell Helicopter, and my congratulations to them on continuing to build a living legend.

Extraordinary utility
Bell – Innovation in design
Bell helicopters
In the beginning
Improving the breed
Civil counterparts
Oddities and one offs
The longbodies
South American success
The UH-1N, 212 and 214
Four bladed success
Unlicensed and licensed
British Hueys
A helicopter for the world
Super Huey
Inside the Huey
Survivors