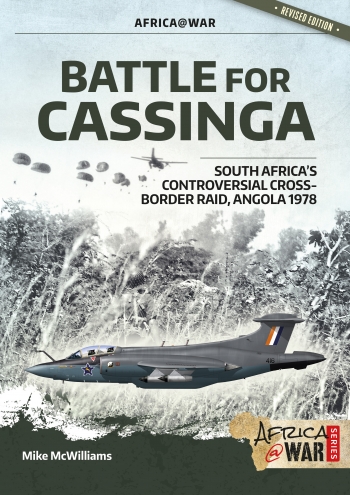 Battle for Cassinga is the first-hand account by a South African paratrooper who was involved in the 1978 assault on the Angolan headquarters of PLAN, SWAPO's armed wing. The battle, although a resounding success, suffered setbacks which could have proved disastrous to the South Africans had they not maintained the initiative. The improvisations made by Colonel Jan Breytenbach ensured that a flawed jump and inadequate intelligence did not adversely affect the outcome. The unforeseen Soviet-supplied SWAPO anti-aircraft guns used devastatingly in a ground role also threatened to derail the attack. A late appearance by a large Cuban/FAPLA (Angolan regulars) armoured column, from the nearby town of Techamutete, threatened to engulf the lightly armed paratrooper force still on the ground. A fierce rearguard action, together with the almost suicidal actions of the South African Air Force pilots, ultimately saved the day.

McWilliams examines why the South African government took the political risk in attacking 'Fortress Cassinga' in a cross-border operation that would clearly attract the ire of the world. He studies SWAPO claims that Cassinga was a refugee camp guarded by only a few PLAN soldiers, explaining why Sam Nujoma, the SWAPO leader, had no option but to perpetuate this falsehood. He looks dispassionately at all the players involved: SWAPO/PLAN and their commander Dimo Amaambo who fled the field of battle; the Cuban and FAPLA intervention; and the South African paratroopers, led by Breytenbach, who not only had to combat a determined enemy but also senior South African staff officers. Above all, it is a soldier's tale which pays homage in equal parts to the bravery of the paratroopers and the determination of the PLAN fighters who stood to their guns until annihilated.

The Savoia-Marchetti S79 Sparviero, from Airliner and Recordbreaker to Bomber and Torpedo Bomber 1934-1947