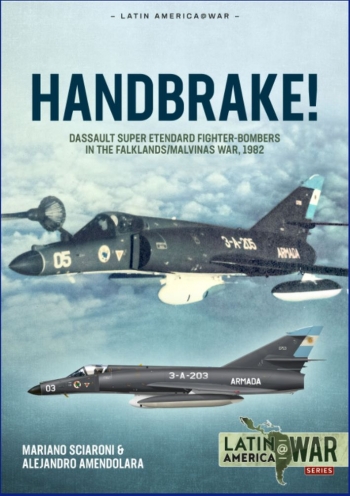 This product was added to our database on Tuesday 10 May 2022.

"Handbrake!": the codeword that was shouted aboard Royal Navy ships upon the detection of an emission from the Thomson-CSF/EMD Agave radar of the Argentine Super Étendard, which carried the dreaded AM-39 Exocet missiles.

Argentina had bought these aircraft and their weapons from France in 1980, assigning them to the re- established 2nd Naval Air Fighter and Attack Squadron. Like most Argentine military units, the 1982 conflict over the Falklands/Malvinas conflict surprised the squadron, which was in the process of incorporating the aircraft and missiles, arriving only a few weeks beforehand from France.

Hastily, under the leadership of its commander, Capitán de Fragata Jorge Luis Colombo, the squadron finished its training and developed tactics for anti-ship attacks, deploying to the south of Argentina.

The effort paid off. With just four aircraft, five missiles, and ten pilots, the squadron succeeded in sinking HMS Sheffield and the container ship Atlantic Conveyor and conducted a long range and dangerous mission against the Carrier Battle Group on 30 May 1982.

Using declassified Argentine and British documentation, as well as interviewing pilots and technicians (French and Argentine) this book details, as never before, the history of this elite military unit from 1980 to the present, with a focus on the 1982 conflict over the Falklands/Malvinas, and the five missions flown.

It is the story of a military unit that revolutionized modern naval warfare, addressing both the military equipment involved and the people who were there. Known as the Lora (after the squadron badge showing a female parrot armed with a club), the squadron terrorised British sailors in the South Atlantic and is still in service with the Naval Aviation of the Argentine Navy.