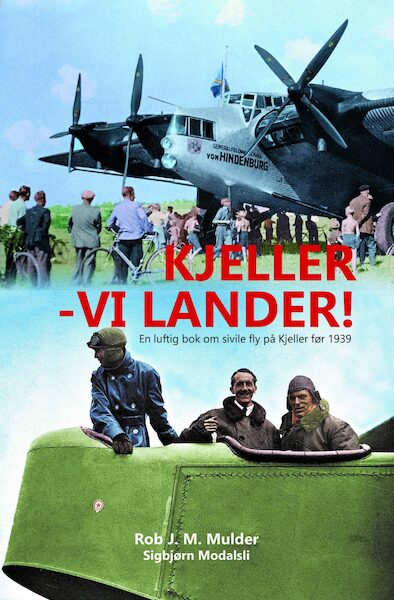 This product was added to our database on Monday 19 September 2022.

There have been many books about the history of Kjeller Airport. It was primarily a military airport where the Army Air Force and the Army's aircraft factory/Kjeller flyfabrikk were based. Kjeller was also the place where land planes from Norway and abroad had to land on arrival in Norway. There was customs clearance on site, and airmen received help with daily maintenance. Many Norwegian aircraft landed here to have their certificate of airworthiness renewed or to have their aircraft registered. The Norwegian Army's aircraft factory/Kjeller flyfabrikk made premises and staff available to private pilots. It was a great collaboration there.

In addition to Norwegian pilots, foreign pilots who came to visit Norway regularly landed. The book attempts to give as complete an overview as possible of the civilly registered aircraft that have been at Kjeller. Unfortunately, it is not always possible to find a picture of the plane at the airport, but where it was found, a picture of the plane is shown. Between 1936 and 1938, Deutsche Lufthansa and Det Danske Luftfartselskab regularly came to Kjeller by land plane on their way to and from London.

The book covers the period up to 1 June 1939, i.e. until Oslo Lufthavn Fornebu was opened. It is primarily a journey through Kjeller's rich aviation history. It is important that that history is preserved for the next generations.

English: The book is about civil aircraft that visited Kjeller air field, just north of Oslo, between 1919 and 1939. All foreign aircraft had to land here for custom duties. All new landplanes to be registered in Norway, had to come for inspection to Kjeller. Thus many types of aircraft were frequent visitors. The author has tried to find the first arrival date of each aircraft, as many, of course, arrived several times. Each first arrival is accompanied with a small story and a photograph (if available).

The text is in Norwegian only.