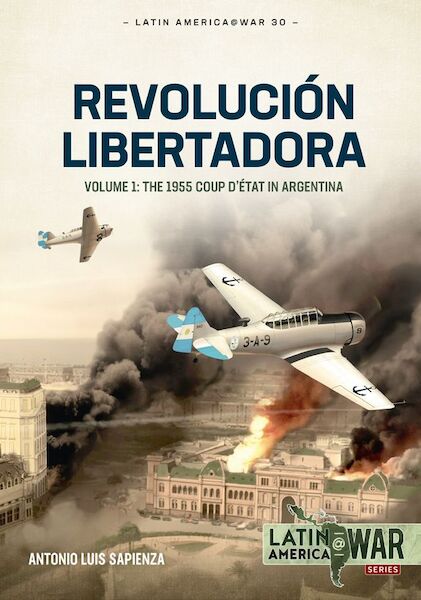 Revoluciˇn Libertadora ľ or the Liberating Revolution ľis the name by which the military dictatorship that ruled Argentina is known after overthrowing the constitutional president, Juan Domingo Perˇn, closing the National Congress, deposing the members of the Supreme Court, the provincial and municipal authorities and university and commissioning the entire Judicial Power through a coup that began on September 16, 1955 and that, after more than two years, transferred the government to President-elect Arturo Frondizi, on May 1, 1958, who would be overthrown in 1962.

Major General Eduardo Lonardi, leader of the coup, took office on September 23, 1955 and was replaced on November 13 by Pedro Eugenio Aramburu, through a palace coup. Both ruled as supreme authorities, claiming the title of President of the Nation.

This government is usually called the "Revoluciˇn Fusiladora" (Firing Squad Revolution) among Peronist sectors because of the military and civilians shot by order of the de facto president Pedro Eugenio Aramburu on the occasion of the attempted uprising led by General Juan JosÚ Valle. In less than 48 hours, civilians and soldiers were shot in Lan˙s, La Plata, JosÚ Leˇn Sußrez, Campode Mayo, the Army Mechanics School and the National Penitentiary. By the night of June 11, 1956, those executed amounted to 16 soldiers and 13 civilians.

Aramburu repealed the current National Constitution by means of a military proclamation and replaced the constitutional text of 1853, with the reforms of 1860, 1866 and 1898. Shortly after, the regime organized under its control, through conditional elections, a Constituent Convention that validated the decision and added article 14 bis.

Richly illustrated, detailing the backgrounds of the 1955 coup, multiple conspiracies, failed coups, the bombing of Plaza de Mayo in Buenos Aires, the conflict with the Catholic Church, the 1955 coup itself, detailing all the military units involved and the actions that led to the overthrow of General Perˇn and his subsequent asylum and exile first in Paraguay and then in Panama, Revoluciˇn Libertadora Volume 1 is an indispensable source of reference about dramatic events that shaped the future of Argentina.