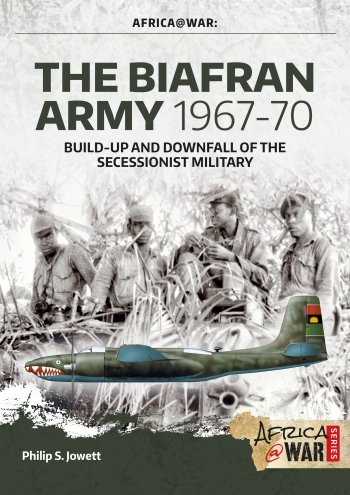 The Biafran Army 1967-70: Build-up and Downfall of the Secessionist Military

This product was added to our database on Monday 28 June 2021.

Synonimous with the starvation that killed almost two million people, Biafra was a parastate that voted to secede from Nigeria in May 1967. Formally recognized by Gabon, Ivory Coast, Tanzania, and Zambia, and supported by France, Israel, Portugal, Spain, South Africa, Rhodesia, and even the Vatican, Biafra's attempt to leave Nigeria resulted in the Nigerian Civil War, which was to last until January 1970. Although lacking official support from abroad, the Biafran authorities quickly built up a military. Their efforts to set up an air force, supported by numerous Europeans – were widely publicised. Indeed, Biafra-related adventures of Polish World War II ace Jan Zumbach, or the Swedish pilot Carl Gustaf von Rosen reached the status of legends before long. Far less is known about the Biafran Army and Navy, their capabilities and intentions, or the conduct of their combat operations. Indeed, the establishment of multiple commando units, and a special guerrilla outfit designed to emulate the Viet Cong, but especially the local manufacture of weapons – including armoured vehicles – remain largely unknown to the public. Based on years of thorough research, 'Biafran Army' is the first work ever to offer a comprehensive, in-depth study of the build-up, training, composition, equipment, and combat operations of all the three branches – the army, the air force, and the navy – of the secessionist military during the Nigerian Civil War. Illustrated by more than 120 rare photographs, maps, and colour profiles, this account provides a unique source of reference for enthusiasts and professionals alike.