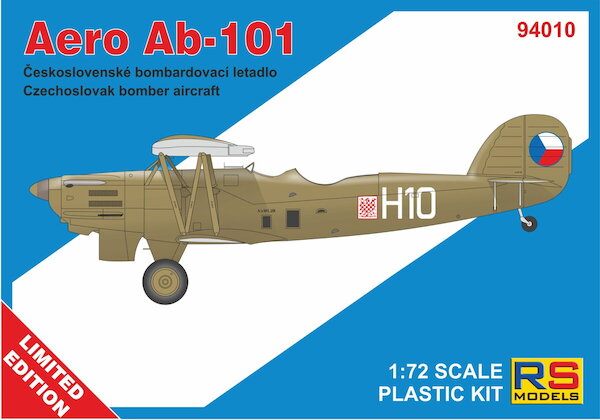 This product was added to our database on Thursday 29 September 2022.

Aero Ab-101 was a Czechoslovak bomber biplane, which was developed from the aircraft Aero A-100, respectively. A-101, in which the Praga HS 12Ydrs engine was installed. The prototype of the aircraft took off on March 25, 1936 and it turned out that this is not a very successful type.

There was no expected increase in speed compared to its predecessor, although the climb and range increased slightly. The aircraft also carried a larger bomb load and improved its ability to operate from shorter runways of field airports. The type was produced mainly because in the short term it was not possible to start production of aircraft of more modern design. In operation at field airports, where the machines spent almost continuously from late May to early October 1938, the wooden parts of the wings were wet, so the aircraft had a limited speed in descending flight to 300 km / h. In combat in suitable weather with the use of clouds, they could effectively serve during the day. The planes carried bombs weighing up to 200 kg, part in the fuselage bomb bay, part on hangers under the wing. During the mobilization in 1938, served in the Czechoslovak. Air Force 60 pieces of these machines, which after the occupation of 1939 captured by the Wehrmacht.