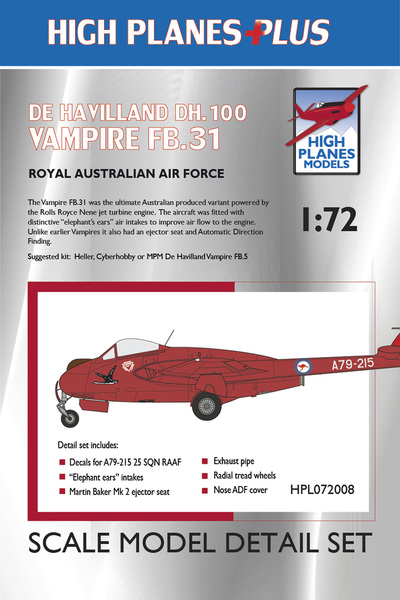 This product was added to our database on Saturday 8 february 2014.

Mind: this product is a conversion set used to convert or adapt a scalemodel. The scalemodel is not included and needs to be ordered separately.

The Royal Australian Air Force fighter arm entered the jet age when in 1947 three De Havilland Vampires were delivered. These were the British F.1 variant and were mainly used for trials. Australia decided on local production of the Rolls Royce Nene engined FB.30 and the first locally built Vampire flew in 1949.

The full potential of the Nene engine was not realised due to inadequate intake air flow. After experimenting with revised wing intakes, a simpler solution of external intakes was adopted. These 'elephant ear' intakes were initially fitted above the fuselage but later moved to under the fuselage to improve flight performance.

Modified FB.30 and new FB.31 aircraft were very similar to the UK FB.5 model. However, some local modifications were also added including a Sperry gyro under a distinctive nose housing and Martin Baker Mk 2 ejector seats. As many of these changes were field modifications we strongly recommend checking photographic evidence for the specific aircraft.

By the time Australian built Vampires entered service the RAAF was deployed overseas in Korea and Malta and only a small cadre remained in Australia. The main user of the aircraft was the Citizens Air Force, a reserve created in 1948. The aircraft were retired following the CAF disbandment in 1960.