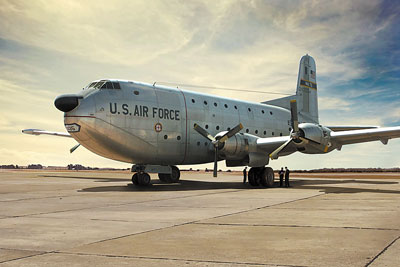 This product was added to our database on Friday 11 January 2013.

During the WWII period air transport proved its significance, as an important constituent of rapid and mobile movement of troops and vehicles to distant locations. In the post-war years, with the increase of tension in the world political situation and with the beginning of the Cold War, the role of transport aviation grew even more. The United States of America, aspiring to world leadership, had to be able to place its troops in all the various corners of the world.
In 1947 the Douglas Aircraft Company radically reworked the design of the earlier C-74, building an entirely new machine. The fuselage of the airplane was considerably increased, and there appeared two clamshell doors and a hydraulic ramp in the nose, and an elevator in the rear fuselage. Each airplane was fitted with four powerful Pratt & Whitney R-4360 engines rated at 3,800 hp. The plane's 23 meter cargo compartment could contain guns, trucks, tanks and other military vehicles. It was the only aircraft at that time which could transport heavy tanks or
engineering equipment such as bulldozers. As a troop transport the airplane with its double-deck fuselage could carry over 200 fully-equipped soldiers. In case of necessity the cargo compartment could be reconfigured as a flying hospital, and then the C-124 could transport 127 wounded escorted by medical staff.
The first flight of the C-124 was at the end of 1949, and six months later delivery began to the United States Air Force.
From the beginning of the C-124's service career it became clear how important it was for the strategic operations of the American military. During the conflict in Korea the C-124 provided rapid movement of troops to the troubled region of South-East Asia, thus helping to stabilize the situation in that corner of the world. With the onset of the nuclear missile arms race between the USSR and the USA, it was naturally the C-124 which carried out transportation of the American missiles to Europe.
The majority of the 448 C-124's built went to Strategic Air Command and also to the Military Air Transport Service. These aircraft were permanently at work, as in conditions of continuous tension in the world they constantly transported both conventional and nuclear weapons, not only across America, but also beyond its territory.
In addition, the C-124 took part in transportation of loads to the Sixth Continent, within the framework of research in the Antarctic Continent by the United States of America.
The intensive military career of the C-124 lasted up until the beginning of the 1960's, and only with the appearance of the more modern C-141 Starlifter was this exceptional machine relegated to the reserve ranks. They were gradually taken off from strategic operations and transferred to units of the US Air National Guard. The final flights of the C-124 for the United States Air Force were in the mid 1970's.