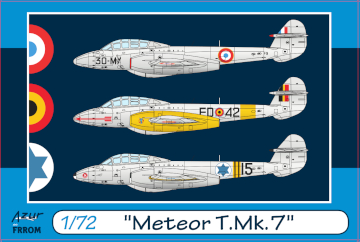 This product was added to our database on Saturday 10 April 2021.

History:
One of the first jet fighters, the Gloster Meteor became operational in July 1944 with both the F.Mk.I & III variants seeing service by WW2's end in 1945. The Meteor T.Mk.7 was developed post-war as a 2-seat training version. Over 600 trainers were produced with the UK, unsurprisingly, being the largest user, although several other nations would also operate smaller quantities of T.Mk.7s as indicated here - Australia 7, Belgium 42, Brazil 10, Denmark 9, Egypt 6, France 14+, Israel 6, Netherlands 45, New Zealand 2, and Sweden 3.

Egypt first obtained Meteors in 1949-50, thus giving its air force a significant technological advantage over that of Israel. The UK then sold Israel Meteors in 1954-55 which restored some balance in the air-fighting capability of these Middle East adversaries.

Israel Ben Shachar became the first Israeli jet-pilot when he flew a Meteor T.MK.7 in the UK prior to Israel's initial Meteor procurement of two T.Mk.7s and 11 F.Mk.8s. The first jets to land in Israel were two Meteor T.MK.7s on the 17th of June 1953. To mark the significance of this occasion the aircraft were named Sofa and Sa'Ar by the Israeli Prime Minster, David Ben Gurion. They were to be operated by the Israeli Air Force's (IAF) 117 Sqn, which was also equipped with the Meteor F.Mk.8. The IAF's six T.MK.7s were coded Aleph 13 to 18.

The IAF added a belly camera to these planes and used them for photo-reconnaissance. Black 13 was lost in the lead-up to the 1956 Suez Crisis, referred to as Operation Kadesh by Israelis and Operation Mousquetaire/Musketeer by the French and British forces respectively. During these operations Israeli, French, and British aircraft had vivid Identification markings of black & yellow 'Suez Stripes' applied in a similar manner to WW2 black & white 'D-Day Stripes'. The IAF Meteor T.Mk.7s flew photo-recon missions and provided higher HQ planners with a good view of the actual battleground situation.

Following the Suez Crisis, the Meteor T.Mk.7s resumed peacetime operations. One was lost on September 26th, 1960 to a bird-strike with the crew bailing out safely. Two more . MK.7s were lost in April 1962 and November 1966.

Israel's Meteor T.MK.7s were finished in natural metal with six Star of David national insignia in the usual positions. Each aircraft's number was initially preceded by the Hebrew letter 'aleph' and applied in black to the fuselage sides and nosewheel door. The nose cone, engine intake lips, and the tailplane's bullet-shaped fairing were quartered in black and white, matching the squadron's Meteor F.Mk.8s which wore the same livery.

France received at least fourteen Meteor T.Mk.7s, eleven of which were ex-RAF machines that were coded F1 to F11. There may have been two additional machines from an embargoed Syrian order. Meteor T.MK.7s served with the 30 čme Escadre de Chasse (in Tours), the Centre d'Instruction Tout Temps (CITT 346, Reims, an all-weather Training Centre), le Centre d'Essais en Vol (C.E.V., Test Flying Centre), and EPNER (Istres). The C.E.V. is usually thought to have received seven of these aircraft. Three were known by their ex-RAF serial numbers of 997 and 228, previously the RAF's WG-997 and WH-228 respectively. They were delivered in March and September 1952, whilst number 776 was taken on charge in 1956. Four of the eleven ex-RAF aircraft were distributed as follows - F1 and F2 going directly to the C.E.V. in 1952, whilst F6 and F9 were initially assigned to the 30 čme Escadre, then to CITT 346, and finally to C.E.V. in January 1956.

The Belgian T.MK.7s mainly flew with the Coxyde Fighter School. Belgium also operated some Meteor F.Mk.8s and produced some T.Mk.7.5 'hybrids' which had an F.Mk.8 Tail fitted to a T.Mk.7 fuselage. Four of these T.Mk.7.5 'hybrids' were later sold to Israel in December, 1957.