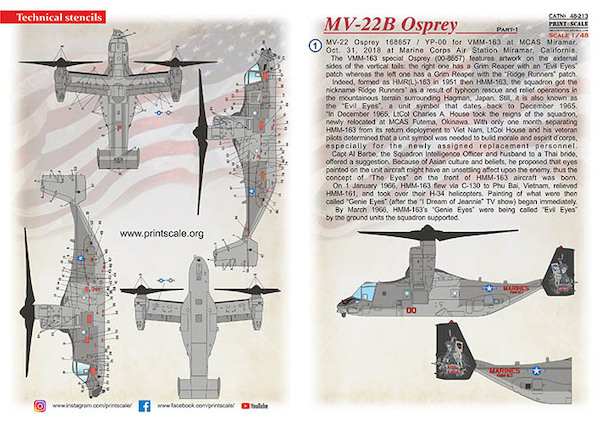 This product was added to our database on Friday 16 September 2022.

1. MV-22 Osprey 168657 / YP-00 for VMM-163 at MCAS Miramar. Oct. 31, 2018 at Marine Corps Air Station Miramar, California.
The VMM-163 special Osprey (00-8657) features artwork on the external sides of the vertical tails: the right one has a Grim Reaper with an "Evil Eyes" patch whereas the left one has a Grim Reaper with the "Ridge Runners" patch.
Indeed, formed as HMR(L)-163 in 1951 then HMM-163, the squadron got the nickname Ridge Runners" as a result of typhoon rescue and relief operations in the mountainous terrain surrounding Hagman, Japan. Still, it is also known as the "Evil Eyes", a unit symbol that dates back to December 1965. "In December 1965, LtCol Charles A. House took the reigns of the squadron,
newly relocated at MCAS Futema, Okinawa. With only one month separating HMM-163 from its return deployment to Viet Nam, LtCol House and his veteran pilots determined that a unit symbol was needed to build morale and espirit d'corps,
especially for the newly assigned replacement personnel.
Capt Al Barbe, the Squadron Intelligence Officer and husband to a Thai bride, offered a suggestion. Because of Asian culture and beliefs, he proposed that eyes painted on the unit aircraft might have an unsettling affect upon the enemy, thus the concept of "The Eyes" on the front of HMM-163 aircraft was born.
On 1 January 1966, HMM-163 flew via C-130 to Phu Bai, Vietnam, relieved HMM-161, and took over their H-34 helicopters. Painting of what were then called "Genie Eyes" (after the "I Dream of Jeannie" TV show) began immediately.
By March 1966, HMM-163's "Genie Eyes" were being called "Evil Eyes" by the ground units the squadron supported.