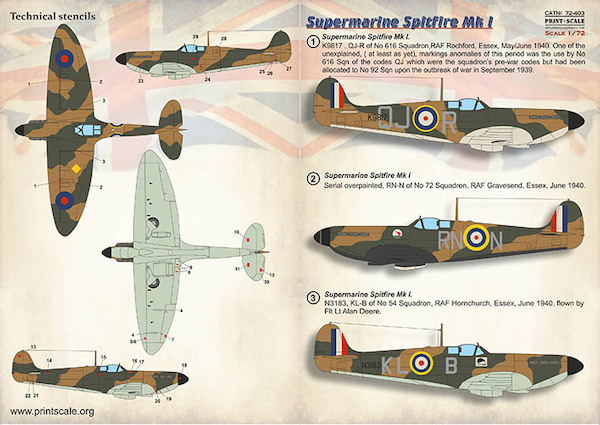 This product was added to our database on Wednesday 22 july 2020.

1. Supermarine Spitfire Mk.l, K9817 , QJ-R of No 616 Squadron, RAF Rochford, Essex, May/June 1940. One of the unexplained, ( at least as yet), markings anomalies of this period was the use by No 616 Sqn of the codes QJ which were the squadron's pre-war codes but had been allocated to No 92 Sqn upon the outbreak of war in September 1939.

5. Supermarine Spitfire Mk l, ( serial overpainted) LO-B No 611 Squadron, RAF Digby, Lincolnshire, February 1940. Often during the alteration of the fuselage roundels from the Red/Blue to the Red/ White /Blue style, the code letters. Note also the name ' BOGUS' under the windscreen and the individual aircraft letter 'B' under the nose, both in Medium Sea Grey.